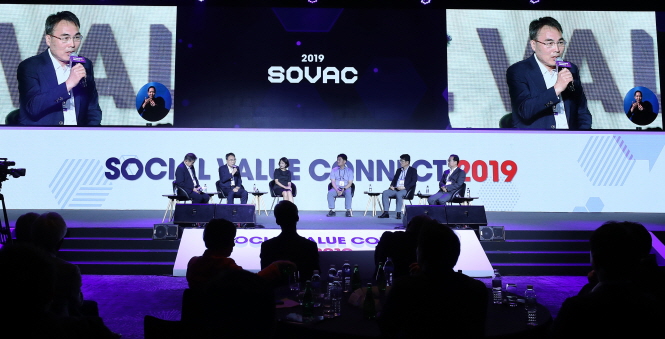 Panels at Social Value Connect 2019 agreed that the act of seeking social value is a worldwide trend. (Yonhap)

SEOUL, May 29 (Korea Bizwire) – Social value, a concept defined as the product of resolving various social issues such as environmental problems and employment, is an inevitable trend of today’s era, experts argue.

Panels at Social Value Connect 2019, held on Tuesday at the Grand Walkerhill Hotel Seoul, agreed that the act of seeking social value is a worldwide trend.

“Our fundamental understanding and approach to the concept of social values have changed,” said Prof. Kim Tae-young from Sungkyunkwan University, a specialist in social value generation by commercial enterprises.

“Non-profit organizations are going beyond the perception of seeing social value as something that needs to be injected to understand it as a form of social impact,” said Prof. Kim.

“And for commercial enterprises, social value is becoming a matter of survival, because it generates new customer value and chances of innovation.”

Kim added that social value will expand if commercial enterprises, non-profit organizations, and the government cooperate, and serve as a platform for social dialogue among all individuals.

Kim Jeong-ho, CEO of Bear Better, a social firm in South Korea that hires people with developmental disabilities, claimed that “social value is not just a temporary spark,” but a larger phenomenon that is “reshaping our worldview.”

Experts pointed out, however, that the world still lacks expertise in social values, despite the fact that it has already entered the era of social values.

“One of the obstacles that prevents social value from being practiced is that, in the perspective of commercial enterprises, outstanding human resources are not being deployed to the field of social contribution,” said Kim.

South Korean actor Cha In-pyo was also present to share his story on adoption, saying that “practicing social value begins by taking interest in someone, and understanding where our hearts are being led to.”

Chey Tae-won, chairman of SK Group and the event’s founder, met with the press and said that “social value is inevitable,” adding that “enterprises should take care of the environment, hire, and pay taxes as part of a responsibility to practice social value, and that it is crucial to generate social value needed to carry out economic activities.”