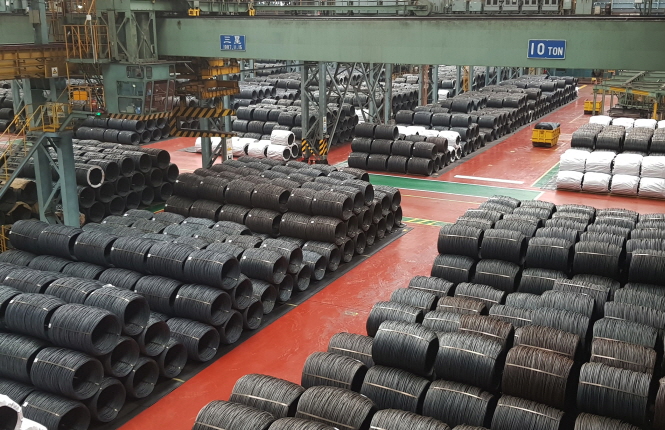 SEOUL, Oct. 7 (Korea Bizwire) – South Korean steelmakers are raising the prices of their steel products to reflect increased costs of raw materials, industry sources said Monday, though the price hikes are likely to be lower than expected.

POSCO, South Korea’s largest steelmaker, recently agreed with a local carmaker to raise the prices of its automobile steel sheets, according to the sources. It is the first time since 2017 that POSCO has done so.

“We can’t confirm the deal with our customer, but it’s true that the company has been trying to raise the prices of our products due to increased raw material costs,” a POSCO spokesperson said.

This hike in raw materials ate into steelmakers’ bottom lines in the first half of the year.

POSCO saw its operating profit drop 15.3 percent on-year to 1.5 trillion won (US$1.2 billion) in the first half, while No. 2 player Hyundai Steel Co. posted an operating profit of 445 billion won, down 33.5 percent from a year ago.

Japan’s Nippon Steel Corp. recently inked a deal with Toyota Motor Corp. to raise the price of steel sheet for automobiles, and industry insiders have said local steelmakers are in talks with their customers to raise steel prices.

“We are still negotiating with our customers over automobile sheets prices,” a Hyundai Steel spokesperson said. “If POSCO and others have raised their product prices, then it will serve as a good reason for us to push for a price hike.”

South Korea’s major steelmakers are also pushing to raise the prices of steel products used in the shipbuilding industry, though negotiations have not been easy.

Local shipbuilders have been demanding a freeze in prices of thick steel plates in the second half so that they can stay competitive amid the global economic slowdown.

Industry observers said that steelmakers will eventually raise the prices of steel plates for shipbuilding to recoup their losses.

“The recent drop in iron prices may weaken steelmakers’ calls for a price hike, but since there are no alternatives, steelmakers are in a better position (in price negotiations),” said Jung Ha-neul, an analyst at Korea Investment & Securities Co.

Analysts predicted that local steelmakers’ earnings for the third quarter will not be impressive since their price hikes were made late. Usually, changes in raw material costs are reflected in product prices one or two quarters later.

“But as negotiations with their main customers were delayed, it appears that the price hikes are to be lower than expected.”