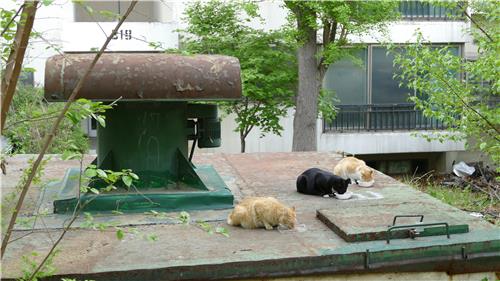 A member of the community’s cat rescue group, “Dunchon Cat”, has been taking care of street cats in the area for nearly a year. (image: Photographer Sin Gyeongmi (cloudspupu@hanmail.net))

SEOUL, Jun. 4 (Korea Bizwire) — Stray cats are not usually associated with local elections, but as animal welfare gains more prominence as a social issue, the furry creatures are creating ripples in the upcoming election.

This is especially true in the case of the street cats left behind at a large apartment complex in Seoul that awaits reconstruction.

Towards the end of last month, a large fence went up surrounding the LH Dunchon Apartment Complex.

As the single largest reconstruction project, the current complex consisting of 164 buildings will be torn down and be rebuilt into a project with the capacity to house 11,106 homes, up from the current 5,930.

As all of the residents left by mid-January, only trees taller than the buildings remain, awaiting to be selected and replanted elsewhere.

Amidst the rumble, a small street cat is visible when entering the complex. The former inhabitants may have left long ago, but the stray cats remain.

A member of the community’s cat rescue group, “Dunchon Cat”, easily recognizes “So-hee,” a cat named after a member of the famous “Wonder Girls” K-pop group.

The organization has been taking care of street cats in the area for nearly a year, continuously keeping count of the cats.

The group’s original plan was to shift feeding grounds outward so that the 150-170 cats remaining could be safely relocated. The funding was to come from residents who sympathized with the cause.

However, the relocation plans came to a halt at the end of last year. A different organization claiming support from a list of assemblymen from the ruling party reached out to Dunchon’s street cats.

As the group promised to safety relocate the cats to a large area in Hongcheon-gun, Gangwon Province, the neighborhood cat moms cheered.

The same organization held an open forum at the National Assembly in March to discuss plans to relocate the cats.

The cat housing venue for the cat project was changed from Hongcheon to Jincheon, North Chungcheong Province in the process. As a result, the original plan to entice the cats outwards from within the complex was pushed back.

One animal activist was skeptical about the new plans.

“Many people believed that there would be no problem coming up with financial support because the group was associated with the National Assembly, says activist Jeong Mi-jin. 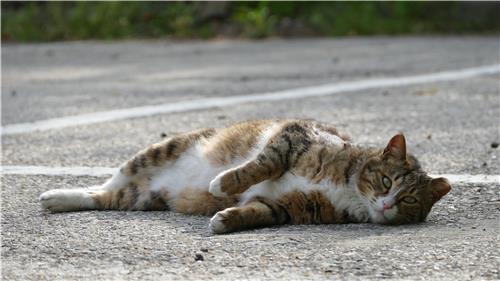 However, there was no talk about how the relocation would take place and how the animals would be taken care of.

Other matters such as how the “cat village” would be sustained and where funding would come from were not discussed, even as only a few days remained before the complex was to be torn down.

Experts say that the homeless cats are being used as a political tool ahead of the elections. Although many electoral candidates are making animal-related pledges, a more careful approach to animal welfare is required.

Chae Il-taek of the Korea Animal Welfare Association said, “Voters may end up being disappointed by politicians who commit to implementing policies to further promote animal rights, only to renege on their promises.”