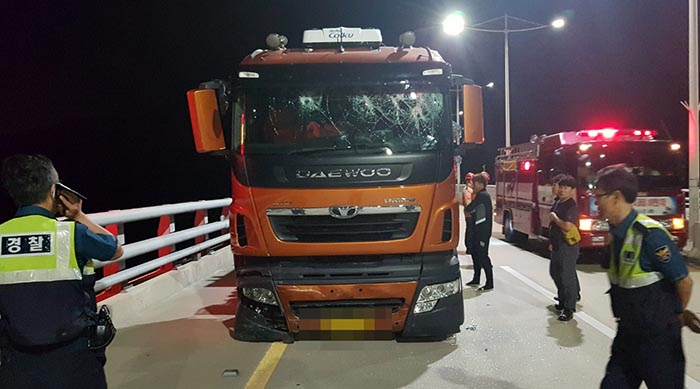 SEOUL, Sept. 11 (Korea Bizwire) — An intoxicated truck driver who slammed his vehicle into a police cruiser was taken down by SWAT team after five hours of rage on Geoga Bridge.

Busan Metropolitan Police Agency said it all started with a 119 call at 11:30 p.m. on September 10 from a drunk-sounding driver requesting help. When the man hung up without giving his location, the police tracked down the caller immediately.

Some 20 minutes later, the police found a 25-ton truck on Geoga Bridge, the 8.2km bridge above the sea that connects Busan to Geoje Island.  The truck was not moving, but had already crashed into a bridge management vehicle and the guard rail nearby. The driver locked the door and refused to exit the vehicle.

Then suddenly, after a 40-minute stand-off, the driver rammed his truck into a police vehicle and tried to flee from the scene. The police fired four rounds at the truck’s front tires – one blank and three live bullets.

The truck, nevertheless, was undamaged and the driver continued on with erratic movements for hours, until finally, he threatened to commit suicide. Two vessels from Changwon Coast Guard and an ambulance quickly arrived at the scene to stand-by.

The five-hour rampage came to an end when the driver tried to open the door to jump off the bridge. The SWAT team broke the front window and arrested the driver at around 5 a.m.

His blood alcohol content read 0.06 percent. The police estimate that it would have been around 0.12 percent when the frenzy started five hours earlier.

The truck, owned by the driver, is registered to a cargo company in Daejeon, according to the police.

“He said life was hard – that was his motive. He apparently drank two bottles of soju in Busan,” said the police. “We are investigating his real motive and the details.”