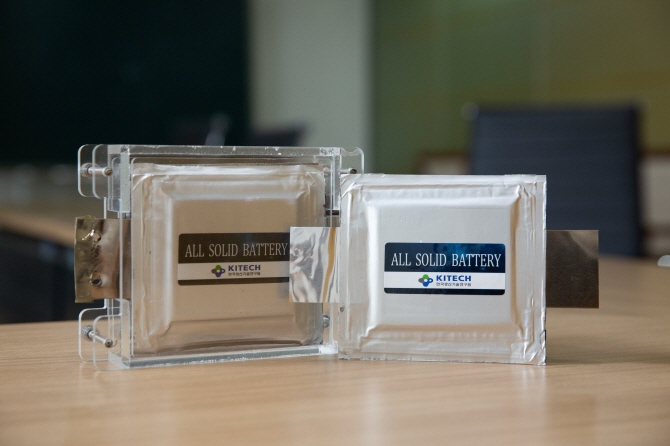 SEOUL, Jun. 17 (Korea Bizwire) — A South Korean research institute said Monday that it has developed a technology to make solid-state batteries that are very compact and safe for use in next generation electric cars and energy storage systems (ESSs).

The all-solid battery replaces the liquid electrolyte found between the positive and negative poles of conventional lithium ion batteries with a solid-state conductive material, according to the Korea Institute of Industrial Technology (KITECH).

The solid-state electrolyte lithium lanthanum zirconium oxide garnet (LLZO) electrolyte has been tested to have a high degree of heat resistance and endurance characteristics, while the bipolar structure allows any battery stacks made from it to be connected in a series, it claimed.

“An overcharged battery was intentionally cut in two with no explosions or fire taking place, while the new bipolar arrangement can allow the power pack to be squeezed into one-third of the space needed for conventional battery packs with the same output capacity,” KITECH said.

This can translate into electric vehicles (EVs) with two times the range without the need to make a car larger.

Kim Ho-Sung, a senior KITECH researcher who led the development, said with greater use of clean energy resources and need for safer ESS and longer range EVs on the rise, the new solid-state battery technology can open new horizons for growth.

Fuji Keizai Group, a leading market researcher on energy trends, predicted the global market for solid-state batteries will reach 28 trillion won (US$23.6 billion) in 2035, as countries around the world move to a cleaner energy source.