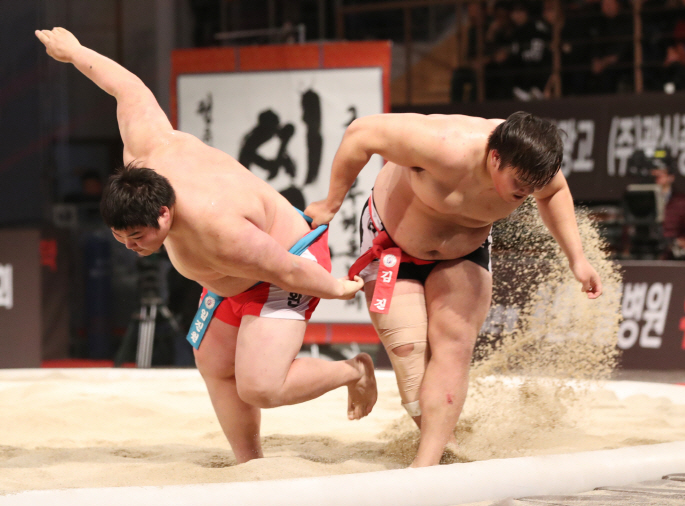 The decision was made during the 13th session of the Intergovernmental Committee for the Safeguarding of the Intangible Cultural Heritage, currently taking place in Port Louis, Mauritius.

This is the first joint inscription by South and North Korea of an Intangible Cultural Heritage of Humanity of UNESCO. The sport’s English spelling is ssireum in the South and “ssirum” in the North.

The two had submitted their own applications, but the committee decided to merge the two bids.

According to the Ministry of Foreign Affairs, Seoul suggested the joint application after a historic inter-Korean summit in April, to which Pyongyang positively responded.

Last month, South Korean President Moon Jae-in and UNESCO Director-General Audrey Azoulay agreed to push ahead with the joint designation of the traditional sport while meeting in Paris, as part of ongoing efforts to mend ties between the two countries. Azoulay visited the North earlier this month to make further consultations with the officials there on the cause.

The decision has been expected since Oct. 29, when an assessment panel under the committee recommended 29 items, including ssireum for listing.

Ssireum is a folk tradition played in a sand pit, where two players wearing long fabric belts around their waists and thighs grip each other’s belt and fight to topple their adversary. It was widely played on various holidays and festivals, but it has slowly lost its popularity and given way to modern sports and entertainment.

“Ssireum is a traditional form of play through which the people express the collective energies amassed during national holidays,” Chung Jae-suk, the CHA’s administrator, said. “We take this opportunity of the joint inscription to continue our efforts to cement the sport’s value as a global intangible cultural asset.”

The sport, which holds important cultural value, is deeply rooted in every aspect of Korea and closely related to the Korean cultural identity and helps enhance social harmony and cohesion, UNESCO said.

For North Korea, the sport is the third UNESCO-recognized intangible cultural heritage after the traditional folk song, “Arirang,” which was inscribed in 2014, and the Korean tradition of kimchi-making, which was listed in 2015.

All three were inscribed after leader Kim Jong-un took power following the death of his late father, Kim Jong-il, in late 2011. This suggests that Kim is paying a great deal of attention to efforts to have his country’s national heritage listed as UNESCO-recognized assets.

Ssireum is still a popular sport in North Korea, with a large competition held in Pyongyang every Chuseok holiday and the winner getting a bull as a prize.