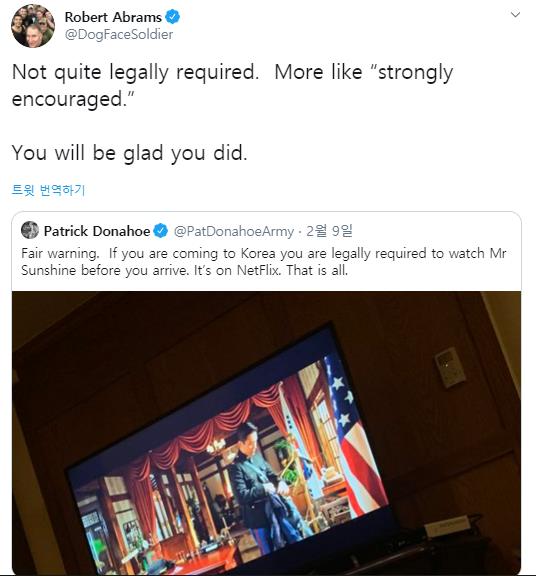 The 2018 series, “Mr. Sunshine,” which starred big-name actor Lee Byung-hun and aired on tvN, recorded the fourth-highest ratings for cable TV and won the top prize at the inaugural Asian Content Awards of the Busan International Film Festival last year.

“Fair warning. If you are coming to Korea you are legally required to watch Mr Sunshine before you arrive. It’s on NetFlix. That is all,” Maj. Gen. Patrick Donahoe, deputy commanding general of the Eighth Army, tweeted Sunday.

Retweeting the post the following day, Abrams said: “Not quite legally required. More like ‘strongly encouraged.’ You will be glad you did.”

Known for its delicate mixture of dramatized history and tantalizing romance, the period drama centers on a Korean boy born into slavery in the Joseon Dynasty (1392-1910) who escaped to the U.S and became a Marine Corps officer.

During the 1871 Shinmiyangyo (U.S. expedition to Korea), he returned to his homeland and was involved in the national movements against attempts by Japanese imperialists to colonize the peninsula.