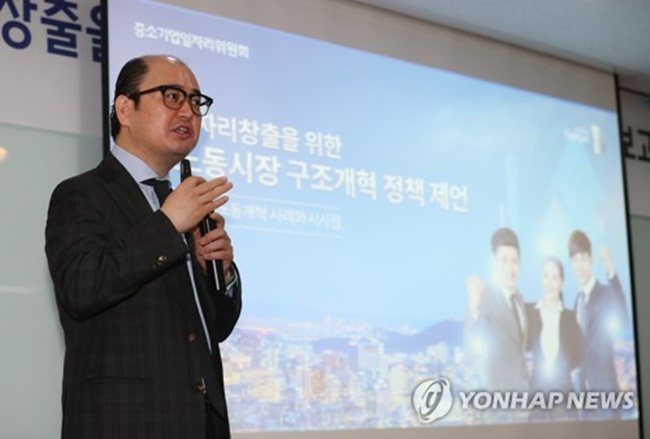 Citing the government’s plan to gradually increase the minimum wage to 10,000 won by 2020, he said the aggressive target will pose a threat to the survival of many businesses. (Image: Yonhap)

SEOUL, Jan. 17 (Korea Bizwire) – The labor policies pursued by the South Korean government will drive up labor costs for local companies and drive down their sales, a German consulting firm said Wednesday.

In a presentation on Korea’s labor policies and their impact on businesses, Lee Soo-sung, managing partner at Roland Berger Seoul, estimated that minimum wage hikes, reduced working hours and hiring workers as regular employees will cost the current government a total of 465 trillion won (US$435.8 billion).

The estimated costs are higher than the country’s 2018 budget of 428.8 trillion won.

Citing the government’s plan to gradually increase the minimum wage to 10,000 won by 2020, he said the aggressive target will pose a threat to the survival of many businesses.

South Korea’s minimum wage rose by 16 percent to 7,530 won starting from Jan. 1, the biggest jump in about two decades. The hike has sparked backlash from small and medium-sized firms and mom-and-pop stores that can ill afford the extra outlay.

The government is also seeking to reduce weekly working hours to 52 from the current 68 by July 2021, resulting in an estimated 323 trillion won sales reduction for businesses, Lee claimed.

For a “soft landing” of the labor policies, the government needs to allow a maximum of eight hours of extra working hours per week for companies that hire fewer than 30 employees, he suggested.

The expert recommended companies adopt a performance-based salary system for long-term survival rather than the current seniority-based wage system.

The Korea Federation of SMEs, which hosted the event, said in a statement that it will deliver Berger’s suggestions to the National Assembly, the labor ministry and the Ministry of SMEs and Startups.