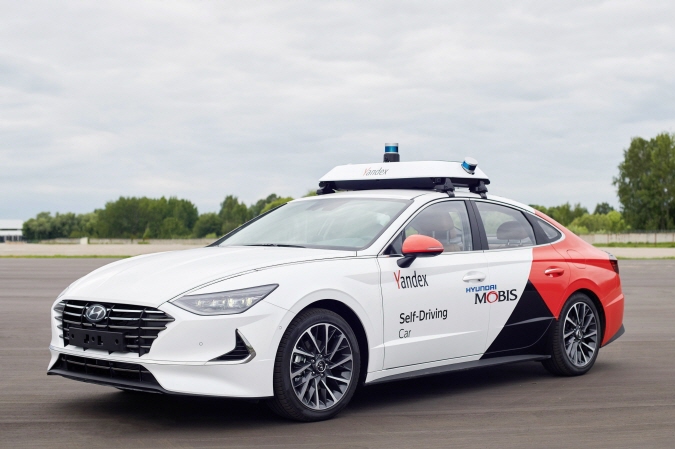 Under an initial agreement signed in March, Hyundai and Yandex have developed a driverless riding platform based on Hyundai’s Sonata midsize sedan.

They will begin testing 100 robo-taxis in Moscow this year, the statement said.

“During the test period, there will be drivers sitting behind the wheel of robo-taxis in order to intervene in case of an emergency though they won’t be engaged in the driving,” a company spokesman said.

The robo-taxies to be put to the test carry the Level 4 autonomous technology.

In a Level 4 car, there is no need for the driver to take control, as the vehicle is designed to perform all safety-critical driving functions and monitor road conditions, he said.

The Russian tech giant has been testing autonomous vehicles on public roads since December 2017 to take the lead in the robo-taxis markets.

Hyundai Mobis, a key affiliate of Hyundai Motor Group, has expanded its business partnerships with overseas companies that have advanced future vehicle technologies.

Hyundai Mobis has been conducting a motorway test of Level 3 technology in the M.BILLY autonomous car since last year in South Korea, the U.S., and Europe.

Since Level 3 cars are only suitable for limited self-driving, the driver must be available to take control of the car if the need arises.

Hyundai Mobis has developed Level 2 technology in which the driver can initiate a lane change on the highway, as well as exit and join highways, if he or she just turns on the indicator light.

The company aims to start commercializing the Level 2 technology this year.

Level 1 was intended to keep a vehicle in its lane and effectively protect the driver from the often serious consequences resulting from lack of attention, distraction or a few seconds of micro-sleep.

Autonomous technologies, however, still suffer from shortcomings since they are designed for operation in non-urban, virtually intersection-free road conditions that do not have tight curves.

Hyundai Mobis expects Level 4 technology to be available after 2025 for operation in urban areas punctuated with intersections that require tight turns and frequent use of breaks.