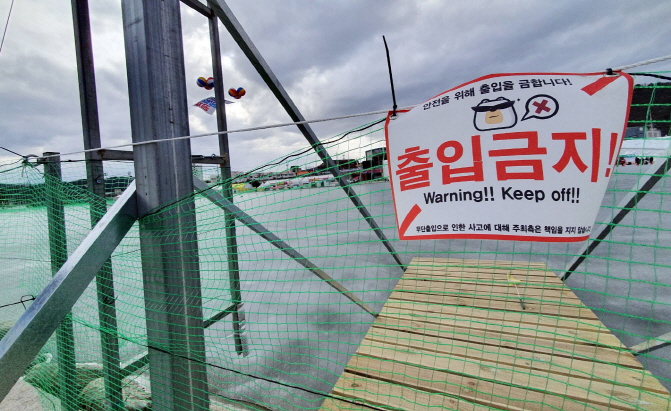 Hwacheon Sancheoneo Ice Festival organizers put up signs asking visitors not to step on the ice for safety reasons on Jan. 28, 2020. (Yonhap)

SEOUL, Jan. 29 (Korea Bizwire) — Winter festivals in Gangwon Province, typically known for its abundant snow and epitomizing winter in South Korea, are suffering a bitter blow from recent weather that has been unseasonably warm.

This winter’s unusually mild weather has had a significant impact on a number of festivals, limiting access to ice fishing grounds, which are typically the main attraction of many of the events.

The Hwacheon Sancheoneo Ice Festival, the country’s leading winter festival, opened Monday in Hwacheon County after two delays, but closed its one-day ice fishing grounds on Tuesday, the second day of its run.

Sancheoneo is a species of trout that lives only in clean fresh water.

The move was a precautionary measure aimed at keeping tourists safe in the warm weather that has been lingering for days.

In fact, the lowest temperature in the morning was 5 degrees Celsius, which is about 6 degrees higher than the -1 recorded on the same day last year.

The ice thickness at the festival site is about 18 centimeters, but the intensity weakened, threatening safety.

Hwacheon County was devastated seeing the festival’s main program, the operation of its iconic ice fishing grounds, closed down.

Desperate attempts to improve the situation, such as pouring snow into the river to lower the water temperature, and mobilizing snow removal machines, were also in vain at temperatures remained above zero.

Meanwhile, winter festivals in other parts of the province also suffered setbacks due to abnormal temperatures. 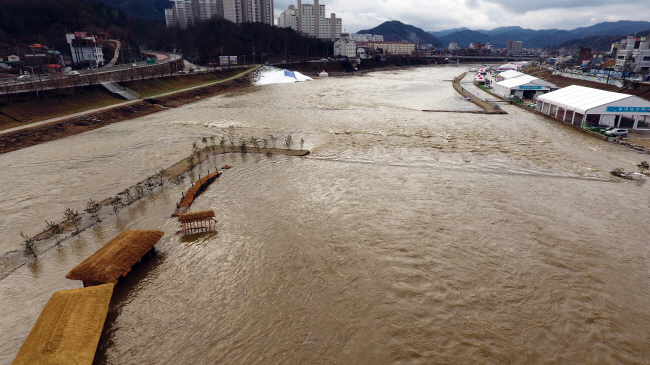 Hongcheon River, the venue of an ice fishing festival set to open this week, is full of muddy water in this photo provided by Hongcheon County after heavy rainfall in Hongcheon, Gangwon Province, on Jan. 8, 2020. (Yonhap)

The PyeongChang Trout Festival was disrupted by unseasonable winter rain that prevented the county from opening its ice fishing grounds from January 7 in PyeongChang County.

The festival Committee temporarily suspended the festival from January 7 to 16 and reopened it on January 17 after emergency restoration by making artificial snow again.

However, the ice at the festival venue, Odae Stream, is not freezing to a safe level.

As a result, the county will operate only bare-handed fishing, indoor fishing, snow sledding and other experience facilities and close on February 2 as planned.

The Inje Ice Fish Festival, which was held under the slogan of “Original Winter Festival,” was initially scheduled to run until February 2, but closed down on Monday.

Furthermore, the Hongcheon River Kkong Kkong Festival, which ended last Sunday, hosted a land-based fishing area as the ice did not freeze during the festival.

In addition, the county built and operated a temporary floating fishing platform on the Hongcheon River in lieu of the usual ice fishing grounds.

It was a strategic plan that allowed visitors to try their hand at catching trout by making an ice hole on the pier’s fishing grounds and casting a fishing rod.

“Global warming is accelerating and winter is getting shorter,” said Lee Won-hak, a researcher at the Gangwon Research Institute.

He added that the county is in dire need to come up with other festival ideas rather than focusing on winter festivals, which are highly dependent on cold weather.