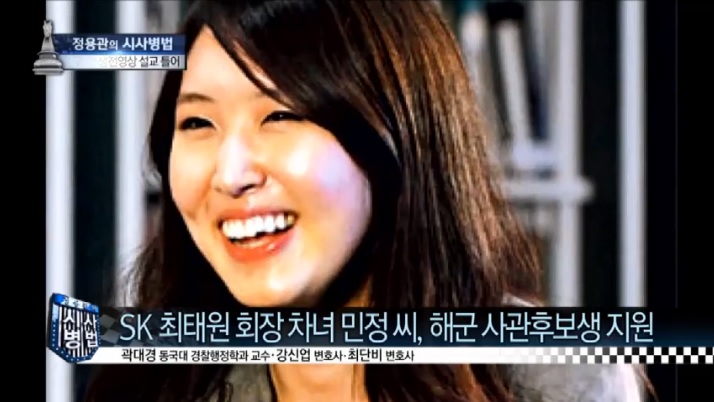 Unless something unexpected comes up, Chey will be commissioned as second lieutenant on December 1.

SEOUL, Aug. 27 (Korea Bizwire) — Chey Min-jeong, 23-year-old daughter of SK Group chairman Chey Tae-won, has drawn public attention by applying for an officer spot in the Navy. This is the first time for a daughter of Korea’s chaebol family to volunteer for military service.

After conducting an interview and physical examination last month, she is waiting for the final announcement that will be made on August 29. According to the Navy, most of those who passed the interview have been admitted. Unless something unexpected comes up, she will be commissioned as second lieutenant on December 1.

The Kyunghyang Daily reported on the 26th that the biggest inspiration that led her to become a Navy officer was Ernest Shackleton, a British adventurer in the late 19th and early 20th century. In the interview session, she confidently answered to a question “What made you decide to apply for this position?” “It was Shackleton’s challenge spirit to navigate the Antarctic and his leadership to save his men under crisis.”

In 1915, Shackleton set sail to the Antarctic with 22 crews in the Endurance. But it was trapped in pack ice and was slowly crushed before the shore parties could be landed. Still he successfully escaped the predicament by building three makeshift boats out of the shipwreck, with no loss of human life. For his heroic exploits, he was later knighted by King Edward VII on his return home.

Min-jeong graduated from Peking University in China in July this year. She earned living expense by working as a teacher at cram schools, and paid her tuition and living expenses with scholarships, which illustrates her strong sense of independence. Chey senior has three children including two daughters and a son.