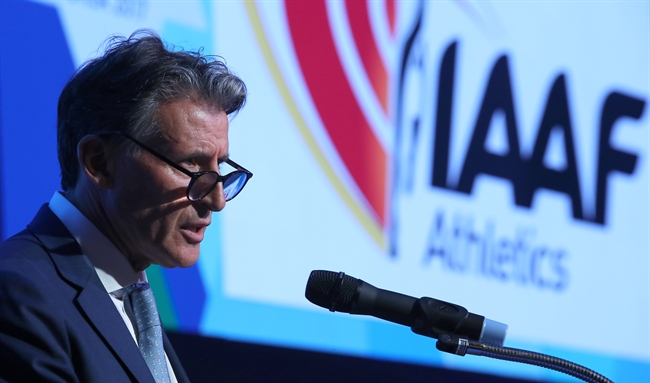 SEOUL, May 11 (Korea Bizwire) — World athletics chief Sebastian Coe said Wednesday he wants to make the sport well represented in school curriculum so that running can be recognized as a daily exercise for young people.

Coe, who has been leading the International Association of Athletics Federations (IAAF) since 2015, landed in South Korea on Tuesday for the 80th Congress of the International Sports Press Association (AIPS), which will run until Saturday in Seoul and PyeongChang, the host city for the 2018 Winter Olympic Games.

“Strength of our sport is directly related to impact of athletics in school,” he said at a press conference in Seoul. “We do need to build on one very strong asset that our sport has and that is more people run recreationally than they do any form of exercise in the world.”

Coe said he met with the Korea Association of Athletics Federations officials Tuesday and talked about athletics in school programs.

“It’s also very important in the lives of young people that exercise is seen as a part of their everyday balance,” he said. “One of my challenges as the president of athletics is to make sure across the globe that athletics is well represented in the curriculum in schools.”

“You want top class athletes who can encourage and excite young people to take up the sport, and they are the role models and they are the people who can attract others to shop window,” he said. “And that is the product of world class coaching, good funding and good facility. But for that to make it happen, you also need young people want to be involved in the sport in the first place and to be encouraged through schools.”

Coe, the organizing chief for the 2012 London Olympic Games, said he doesn’t have specific advice for the local organizers and South Koreans here, who are preparing for the Winter Olympic Games — only that they should focus on the athletes.

With South Korean having a leadership change with new president Moon Jae-in, Coe said the organizers will need some “political support” to make the successful Olympics.

“The great asset of the Games is that it tends to bring people together,” he said. “It will be wrong of me to make comments about South Korea’s political structure, but there is a broad point that I’ve recognized having spent seven years as part of the team delivering the Games is that you need some political support from the government and also support from the opposition parties.” 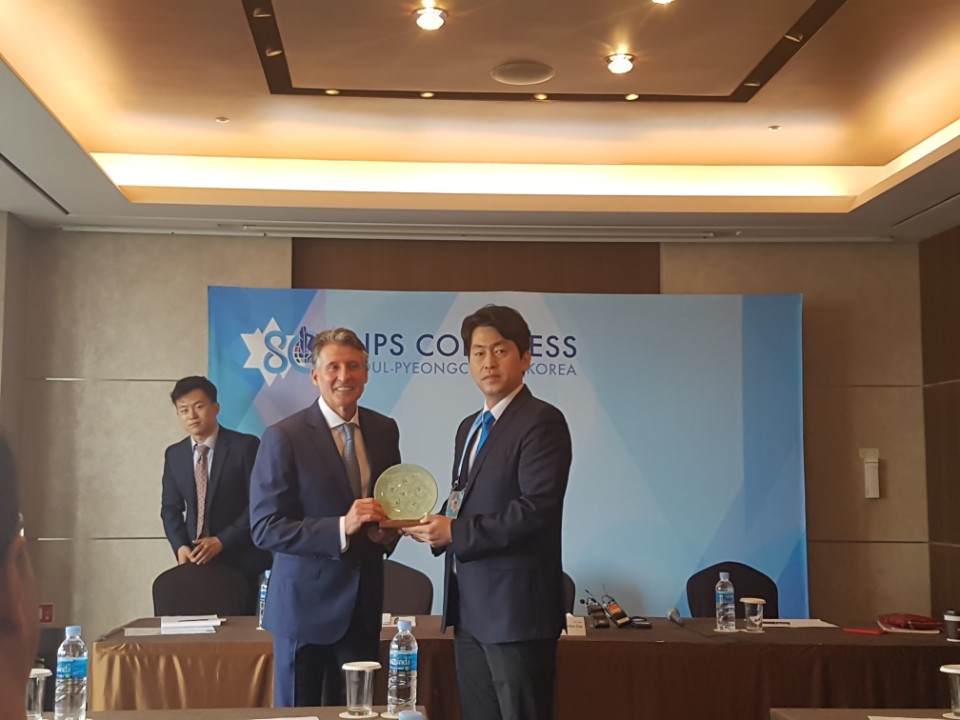 Sebastian Coe (L), head of the International Association of Athletics Federations (IAAF), poses for a photo with Chung Hee-don, the chief of the Korea Sports Press Union, before his press conference in Seoul on May 10, 2017. (image: Yonhap)

For the future of athletics, Coe said it is important to gain popularity from young generations and the IAAF will look into various proposals such as introducing new events like mixed relays.

“It’s really important that our sport innovates and changes and becomes as attractive as it possibly can be for new fresh young audiences,” he said. “It’s important that we create new formats. They are not all going to appear in the Olympics or the World Championships, but there are clues that we’ve already seen about what attracts new audiences and particularly to young people to our sport.”

When asked about advanced shoe technologies from sports gear manufacturers that have been criticized by some fans for giving “too much” help to the athletes, Coe said he actually welcomes the new technologies. The IAAF rule says the shoe must not be used to give an athlete “any unfair additional assistance.”

“I’m not sure that our technical committees have yet made a decision about the shoe, but I think there is a broader point that I need to make here, which is that advance in technology is something that actually needs to be welcomed,” he said. “It’s very important that advance in technology allows the athlete to run more safely and it’s absolutely crucial that technology is accessible to everybody. As long as those are the principles that are maintained, it is actually a sensible way to progress.”

Coe, a two-time Olympic gold medalist runner in men’s 1,500 meters, said that European Athletics’ proposal — which suggests re-writing all world records set before 2005 following the sport’s doping scandal — is expected to be discussed at the IAAF Council in August, although he thinks further consultation is needed with the athletes before it can become a global proposition.

“So, the further discussion or further debate that will take place between now and August will be, I think, extensively around the way we handle the historic times that the athletes have expressed some concerns about,” he said.