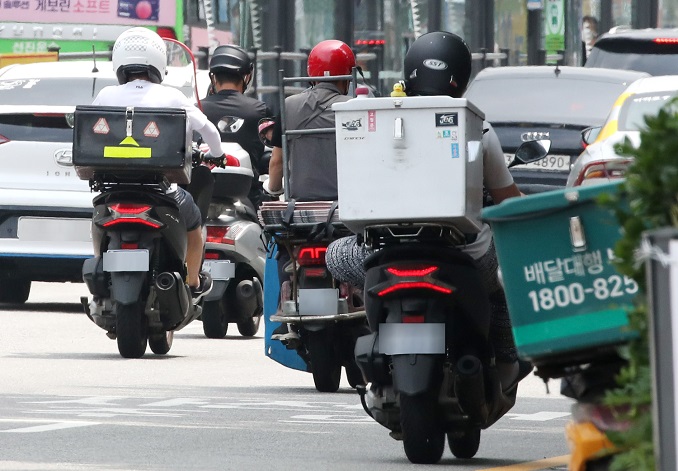 SEOUL, Oct. 24 (Korea Bizwire) — Koreans in their 20s and 30s made up more than half of the growth in the number of new employees for the transportation and warehousing sectors, which are often referred to as delivery businesses, over the past five years, a leading business organization said Sunday.

The Federation of Korean Industries (FKI) analyzed the number of employees by business type based on the data of Statistics Korea.

The analysis showed that as of last month, the number of people in their 20s and 30s who were employed in the transportation and warehousing sectors stood at 420,000, up 122,000 or 40.7 percent from five years ago.

Considering that the total number of employees in these sectors grew by 239,000 during the same period, those in their 20s and 30s made up more than half of the growth in the number of new employees.

In contrast, the number of those in their 20s and 30s who are employed in the manufacturing and financial insurance sectors declined by 8.7 percent and 22.2 percent, respectively, compared to five years ago.

The number of self-employed in their 20s and 30s who have no employees increased by 12.8 percent compared to five years ago. Among them, 53.9 percent or 40,000 people were employed in the transportation and warehouse sectors.

As people in their 20s and 30s flock to delivery businesses, small and medium-sized manufacturers are suffering from a severe shortage of employees.

There are currently more than 226,000 vacancies that companies want to fill, with workplaces employing fewer than 300 workers accounting for 96.9 percent.

By industry, there were 67,000 vacant jobs in the manufacturing sector for a 30.4 percent vacancy rate, indicating that those in their 20s and 30s have a serious tendency to shun manufacturing jobs.

“The nation’s young generation are showing their preference for transportation jobs, including delivery, where they can work on an informal basis without being bound by strict employment terms, rather than manufacturing jobs at SMEs,” a FKI official said.