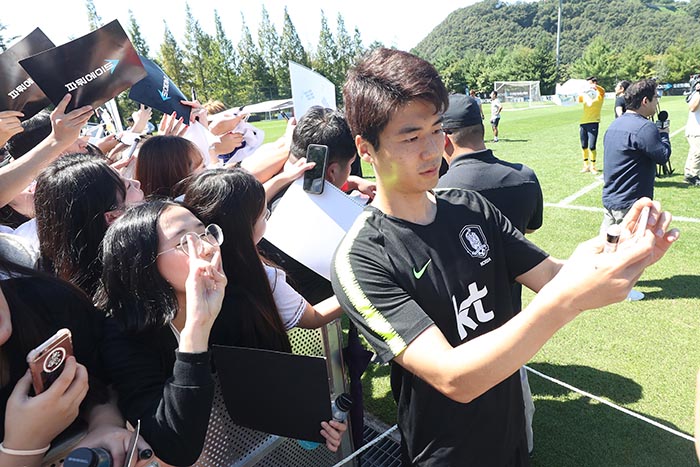 SEOUL, Sept. 12 (Korea Bizwire) – The period from the late 1990s to the early 2000s was the golden age of Korean football when it comes to its popularity among young women.

Star players like Lee Dong-gook, Ahn Jung-hwan, Ko Jong-soo and Lee Chun-soo drew fans everywhere they went, most of them being females.

Screams of “Oppa” – the Korean word for big brother used by women to address male stars – were heard on the pitch. Posters and postcards of the players flooded stationary stores.

This was the time when football was loved by the young.

Everything changed in the mid-2000s, when Park Ji-sung joined Manchester United, a world-famous club in the English Premier League.  From then, fans turned their eyes to European football leagues.

To make things worse, a match-fixing scandal overran the Korean football league, the K-League. Fans left in droves, especially the young ones. Even the national team had trouble attracting spectators.

Now, after a long break, the renaissance of football fandom has arrived.

The pivotal point was South Korea’s startling 2-0 victory over Germany at the 2018 FIFA World Cup in Russia, on June 27, 2018. Team Korea moved on, winning a gold medal in men’s soccer at the 2018 Jakarta Palembang Asian Games in August.

The reversal was readily seen at the national team’s friendly match against Chile on September 11, held at Suwon World Cup Stadium.

Tickets were sold out days in advance, and scalpers hawked tickets outside the stadium.

Teenage girls were seen hunching over the fences to take pictures of their favorite players. Whenever Song Heung-min possessed the ball, their screams blasted the pitch.

When a TV camera rested on Lee Seung-woo warming up, the girls let out a buoyant cheer.

This is a new experience for these young women who did not see the 2002 Korea-Japan World Cup hosted at home.

While the acclamation of young women was refreshing, it is uncertain whether they will visit football stadiums during the season.

Most of their favorite players from the national team play for clubs in Europe. It’s likely that they will be soccer fans only when there is an international competition.

“I feel responsible for bringing that fire to our league,” said a K-League official who watched the game. “We will try our best to bring the renaissance.”