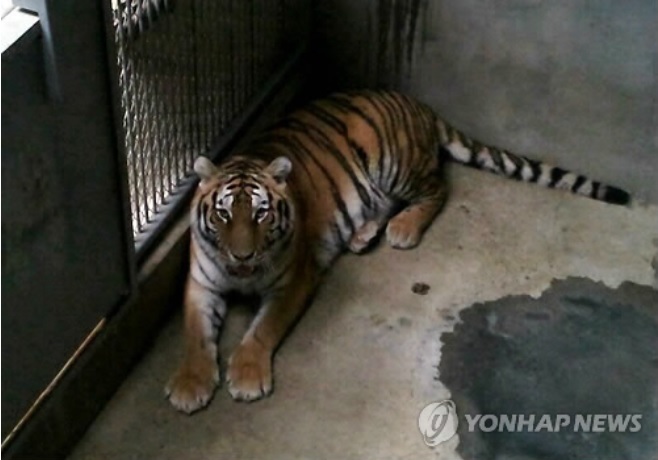 Zoos’ personnel usually rear new born tiger babies separate from mother tigers often sensitive after birth. However, Samjung the Park has chosen to leave them in a natural state. (image courtesy of Yonhap)

SEOUL, Jan. 25 (Korea Bizwire) — A female Siberian Tiger kept in Busan’s only zoo, Samjung The Park, is reported to have devoured its own offspring, according to an announcement from the zoo and the Nakdong River Basin Agency of the Ministry of Environment on January 22. The mother tiger gave birth to a cub on December 10, 2014, but the cub was nowhere to be found after 20 days from its birth. The zoo concluded that the mother tiger ate its offspring based on the bloodstain on its mouth.

Zoos’ personnel usually rear new born tiger babies separate from mother tigers often sensitive after birth. However, Samjung the Park has chosen to leave them in a natural state. The mother tiger is estimated to have attacked its baby out of stress during one night when there was no guard around.

An Dong-su, head of the zoo’s animal management office, said that the mother tiger seems to have killed its own child due to a stress from its repeated failure of breaking out of its stall to meet a male tiger in the next stall.

Jeon Jin-Gyeong, director of the Korea Animal Rights Advocate(KARA), suggested that the zoo’s negligence might have caused the problem saying that although feline animals sometimes kill their own offspring, it is extremely rare for them to eat offspring. She also said that putting male tigers right next to the mother tiger’s stall could have immensely stressed the mother tiger. She said that she cannot but raise the blame on the zoo’s management due to these circumstance.

Samjung The Park’s animal management issue was also on the hot seat when the zoo’s three mountain goats escaped from their stall. Two of them were captured on the day of the break but the remaining one roamed around in near towns for 13 more days.

Meanwhile, the Nakdong River Basin Agency of the Ministry of Environment is planning to issue a warning to the zoo for its lack of reports on the offspring’s death to relevant animal agencies. Siberian Tigers are designated as natural monument and non-declaring of birth and death of natural monument animals is to be punished under the new law on wild animals. Since the grace period of the said law is due to this July, the Nakdong River Basin Agency said that it will just issue a warning, however, with proper pressure on the zoo to assume the responsibility of the dead cub tiger.