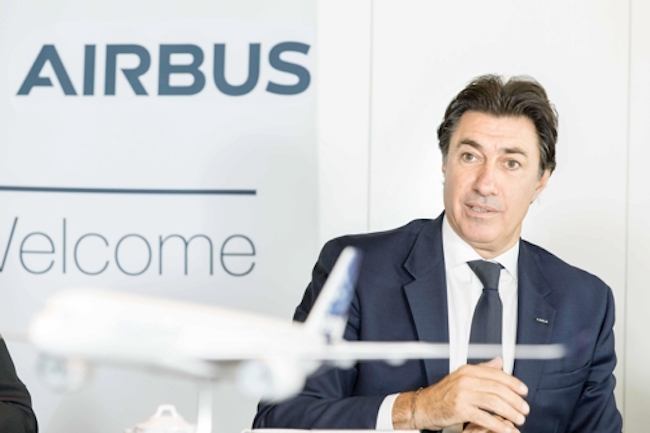 The head of Airbus Group Asia-Pacific, Pierre Jaffre, said during the media briefing, “Our South Korean operations fulfill the aspects of technical expertise, quality and punctuality that are in accordance with Airbus’s strict standards.” (Image: Yonhap)

SEOUL, Oct. 17 (Korea Bizwire) – The day before Seoul ADEX 2017 (International Aerospace and Defense Exhibition), a face-to-face with media outlets held by Airbus representatives revealed that its South Korean business operations are expected to increase by $1 billion to a total $6 billion by 2021.

The increase in scale is due to the production of commercial aircraft taking up a greater share of Airbus’s output, which in turn will lead to an increase in demand for the South Korean parts that go into these planes.

The head of Airbus Group Asia-Pacific, Pierre Jaffre, said during the media briefing, “Our South Korean operations fulfill the aspects of technical expertise, quality and punctuality that are in accordance with Airbus’s strict standards.”

He added, “The size of Airbus’s local operations has continuously expanded in the last few years, with both sides benefitting. The creation of nearly 6,000 high quality jobs and Airbus’s partnerships with Korean companies are part of an exemplary case of collaboration that transcends national borders.”

Local tier 1 suppliers for Airbus include KAI (Korea Aerospace Industries) and the Korean Air Aerospace Division. The number of SMEs working with Airbus is on the rise as well.

Some of the various structural components produced domestically are aircraft wing frames, sharklet wing tips and doors for cargo and landing gear.

In 2015, the A330 MRTT was selected and four orders of the planes were registered. (Image: Yonhap)

Airbus for over 25 years has been the Republic of Korea Air Force’s chief supplier. In 2015, the A330 MRTT was selected and four orders of the planes were registered.

This year, the manufacturing assembly line is putting the finishing touches on the aircraft and tailoring it to local specifications. Delivery is expected in 2018.

The aircraft manufacturer is expected to unveil its next generation military cargo plane, the A400M, during Seoul ADEX 2017. The plane is designed to replace prior cargo plane models and provides a distinct combination of tactical capabilities.

The exhibition will also showcase the C295 maritime patrol aircraft, which was introduced into the South Korean market in July of last year.

Jaffre hinted at the diversity of aircraft that will become available to South Korea as Airbus becomes more entrenched in the country. “While civilian aircraft is the category in which Airbus has achieved the most success, a business plan for helicopters is steadily moving ahead. In the areas of national defense and space travel, Airbus is in possession of large number of cutting edge products,” he explained to journalists.