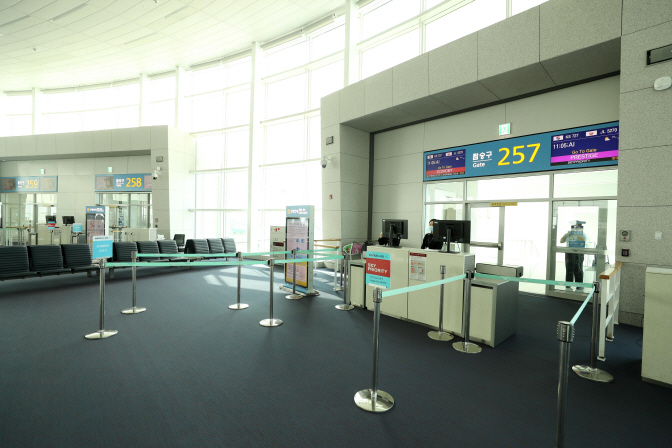 South Korea has so far reported nearly 7,400 COVID-19 infections, while Japan has logged more than 500 patients.

A South Korean flag carrier’s morning flight to Japan carried less than 10 passengers, while airplanes returned almost empty from Tokyo and other Japanese cities in the day.

Only eight passengers were aboard a Korean Air flight that departed from Incheon International Airport, west of Seoul, at around 11 a.m. for Osaka.

There were no Koreans and all were foreigners, including Japanese and Chinese travelers.

Korean Air said 26 seats were originally booked on the 121-seat plane but only eight people showed up, adding all the passengers were traveling for visa renewal and other unavoidable reasons.

Incheon International Airport Corp. estimated that 318 passengers — 116 from Incheon to Japan and 202 flying the other way — will travel between the two countries during the day.

The estimated figure is less than one 100th of the ordinary level, as the daily number of airline passengers between South Korea and Japan averaged 36,792 in 2018.

Only a week ago, over 6,000 passengers traveled on the Korea-Japan routes.

The corporation said the actual number of passengers will fall as many are expected to cancel their reservations due to the imposition of entry restrictions.

Another Korean Air flight arrived at the Incheon airport from Osaka Monday morning, with only 25 passengers aboard.

All of them were allowed entry into the country after going through reinforced quarantine procedures.

“I was embarrassed at the abrupt decision by Japan. It’s unpleasant. I went to Japan for company business but returned earlier than scheduled due to the rapidly changing circumstances,” Kim said.

Another Korean man said he traveled to Japan to deal with some family affairs on behalf of his Japanese wife, due to fear that she may have difficulties during the reentry process.