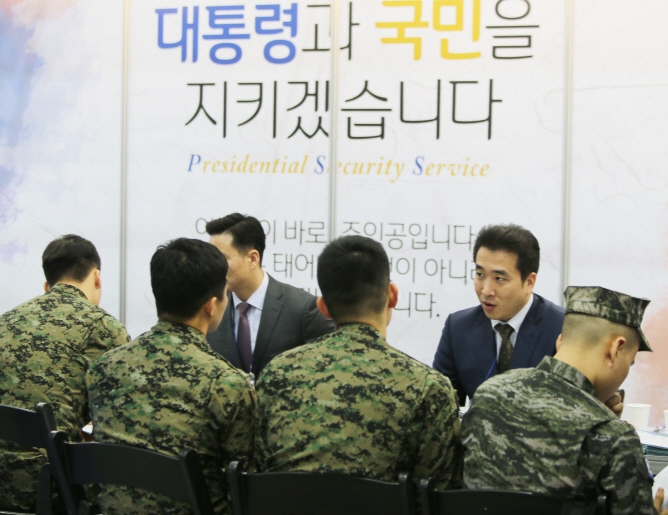 SEOUL, Sept. 10 (Korea Bizwire) — The Presidential Security Service (PSS) will be accepting applications, starting September 13, from those who have what it takes to join the president’s security detail.

One promotional poster which advertised the openings said, “Applicants may be short. Applicants can wear glasses.

In an era where drones attack, the security detail must change with the times. We are looking for smart employees that can take action under future threats.”

Ju Young-Hoon, the head of the PSS, posted the ad on his social media account on September 7, explaining that the new qualifications were not just about removing physical requirements for the job.

“It is an example of how the paradigm is shifting in terms of the future of security details,” said Ju.

The head of the Presidential Security Service went on to say that “drones and robots have become a tool for terrorism, while online hacking can paralyze all systems.”

As the physical fitness of security officers is no longer enough, “the president’s security detail must incorporate creative thinking to counter new threats,” said Ju.

Ju also said that martial arts techniques can be helpful but are not included in the application requirements.

However, the high-level security officer pointed out, qualities that an employee at the Presidential Security Service must possess are “civic awareness” and an upright sense of nationalism and history.

In addition, “loyalty and devotion are all that is required,” stated Ju.

The Presidential Security Service will be hiring grade 7 employees for its security detail and telecommunications department.

Applications will be accepted between September 13 and 28. Applicants must take a written test on October 13. The test will have 100 multiple choice questions that test common knowledge.

Those who proceed to the second round will be given a personality test, a physical test, an oral interview and a written essay exam.

The third and final round will have applicants take another physical test as well as participate in an in-depth interview.