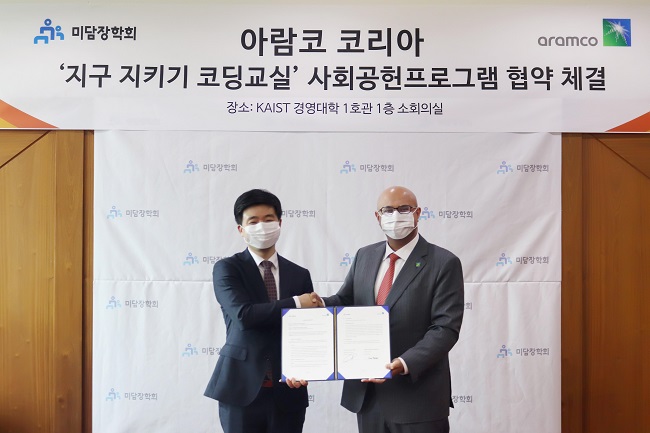 This photo, provided by Aramco Asia Korea, shows its Representative Director Fahad A. Al-Sahali (R) shaking hands with Jang Neung-in, MIDAM’s standing director, after signing a partnership agreement for coding programs at the KAIST College of Business in Seoul.

MIDAM Scholarship Foundation plans to begin a yearlong program later this month to help bridge the educational gap in computer science among elementary and middle school students in Seoul and the central city of Daejeon, according to Aramco Asia Korea.

The program will be provided online first due to the coronavirus pandemic. The foundation plans to offer an offline program, depending on the situation on the COVID-19 pandemic.

Professors and university students majoring in computer science from major universities will participate as volunteer teachers.

Fahad A. Al-Sahali, head of Aramco Asia Korea, said the programs are meant to ensure that underprivileged students are not left behind in computer science education.

“Learning how to code is one of the essential skills that the future might require from students, and while we equip them with such skills, we aim to highlight the importance of protecting our planet,” he said in comments provided by the company.

Aramco, the world’s largest oil company, is currently the top shareholder of S-Oil Corp., a major oil refiner operating in South Korea, with a 63.41 percent stake.