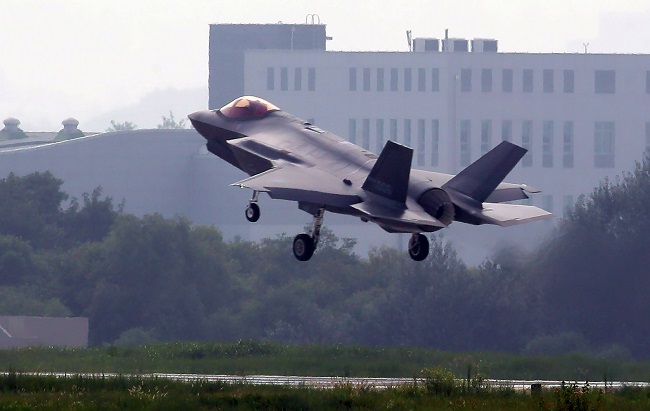 In this file photo, taken on Aug. 22, 2019, an F-35A stealth fighter lands at an air base in Cheongju, about 137 kilometers south of Seoul, after a training flight.

SEOUL, June 30 (Korea Bizwire) — A planned arrival of F-35A next-generation fighter jets to South Korea from the United States has been delayed to the second half of the year due to the new coronavirus, a military source said Tuesday.

South Korea began bringing in the advanced stealth fighters in March last year to beef up reconnaissance capabilities under a plan to deploy 40 units through 2021. Last year, 13 F-35As arrived here.

Among some 10 additional planes set to arrive here this year, some were delivered in February.

But those that had been scheduled to arrive in April have not been delivered yet due to travel restrictions that the U.S. Department of Defense imposed on all uniformed personnel, including pilots, over coronavirus concerns.

The defense ministry and the Air Force said the fighters will arrive by the end of the year as planned and that there will be no setbacks in putting them into the force as scheduled.

As a centerpiece of the country’s strategic targeting scheme against potential enemy forces, the warplane is expected to boost operational capabilities and strengthen the readiness posture against threats from all directions, military officials said.

A ceremony marking its deployment was held last year.