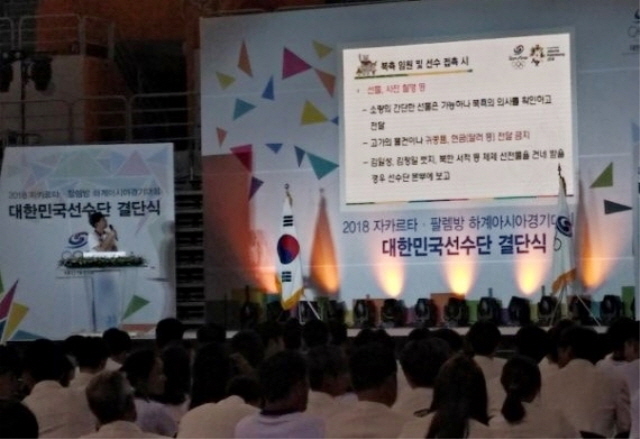 On August 7, South Korean athletes held an inaugural rally before receiving instruction on how to behave when coming into contact with their North Korean counterparts. (image: Yonhap)

SEOUL, Aug. 8 (Korea Bizwire) — With the 18th Asian Games in Jakarta-Palembang to feature a joint delegation from both Koreas, South Korean athletes participated in a special information session that discussed the precautionary guidelines on how to behave around North Koreans.

On August 7, South Korean athletes held an inaugural rally before receiving instruction on how to behave when coming into contact with their North Korean counterparts.

The athletes were asked to address other athletes as from the “North” and “South” (in place of “North Korea” used in South Korea and “South Joseon” used in North Korea).

In addition, the South Korean participants were told to ask North Koreans if it would be okay to give them a gift rather than just presenting them with one.

Athletes were also advised not to talk about politics and other sensitive topics.

Another request was not to ask about North Korea’s economic circumstances or to criticize the North Korean regime.

North Korean leader Kim Jong-un is to be called “Chairman Kim” although it was not advised to talk about the dictator.

Meanwhile, if South Korean athletes are given badges depicting Kim Il-sung or Kim Jong-il or any other propaganda materials such as books as gifts, they must be reported to authorities.