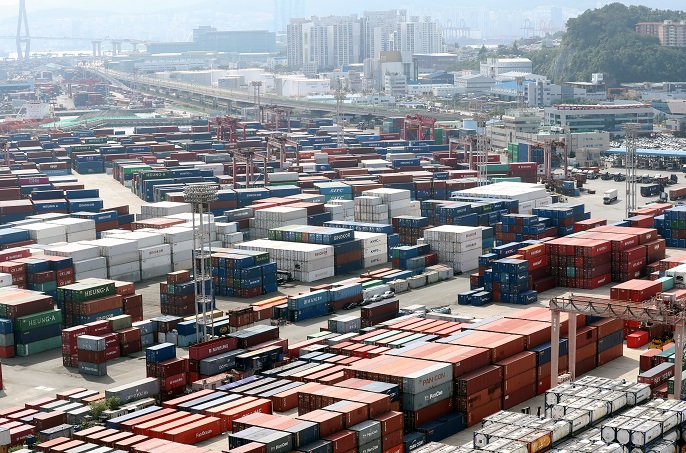 This file photo, taken Aug. 2, 2021, shows stacks of containers at a port in South Korea’s southeastern city of Busan. (Yonhap)

SEOUL, Sept. 15 (Korea Bizwire) — Large South Korean companies’ ability to service their debts improved sharply in the first half of the year amid the coronavirus pandemic, a corporate tracker said Wednesday.

The interest coverage ratio for 259 out of the country’s top 500 firms averaged 10.3 as of end-June, compared with 4.3 a year ago, according to CEO Score, which tracks financial details of conglomerates.

Those with an interest coverage ratio of less than 1 for three consecutive years are often referred to as marginal or zombie firms.

Their combined operating profit came to 85.5 trillion won (US$73 billion) in the January-June period, up nearly 105 percent from a year earlier.

A total of 23 companies had an interest coverage ratio of less than 1 as of end-June, down a whopping 38 from a year earlier.

Thirteen companies registered an interest coverage ratio of 1 or higher in the first half after posting below-par figures for two years running, according to CEO Score.