SEOUL, Jun. 15 (Korea Bizwire) — Returning from a one-year hiatus following the release of its previous single, successful K-pop girl group BLACKPINK on Friday dropped its new EP, led by the track “Ddu-Du Ddu-Du,” which comes with a choreography of finger guns to match that shooting sound.

The new EP, “Square Up,” is the female quartet’s first record since their debut around two years ago. Their three previous digital singles, including “Square Two,” all went viral with three of the songs topping the Billboard chart of World Digital Song Sales.

“Ddu-Du Ddu-Du,” the lead track of the new EP and a creation of YG’s star producer Teddy Park, is highly addictive hip-hop number, laced with aggressive trap beats. The song’s refrain, “Hit you with that ddu-du ddu-du,” adds to the addictive quality, as does the choreography of hand guns that comes with the line.

The new record was released at major online music stores at 6 p.m.

“The title ‘Ddu-Du Ddu-Du’ could be the sound of shooting or the sound of breathing. It’s also like our incantation,” member Jennie said in a press conference before the record release. The title embodies the new record’s vision of “squaring up and facing up.”

“With our past songs, we tried to show our girlish side. This time, we came back with more maturity and intensity with powerful hip-hop feelings and rap. With the new release, our biggest goal is to show BLACKPINK making various attempts,” member Jisoo said.

She said the stage performance of the lead track will come have an intense dance in the song’s dance break close to the end.

“The stage performance is sure to add more charm to the song,” Jisoo said.

Besides the main song, the record has three more tracks — “Forever Young,” “Really” and “See U Later” — all written by Teddy and composed jointly by him and other artists.

“Forever Young” is a moombahton dance song reminiscent of a summer beach and a road trip, Thai member Lisa said.

Member Jisoo’s favorite song is “See U Later,” whose lyrics are about “saying bye to a bad guy,” according to her. “With hilarious lyrics matched with fun melodies, I think the listeners will get addicted very easily.” 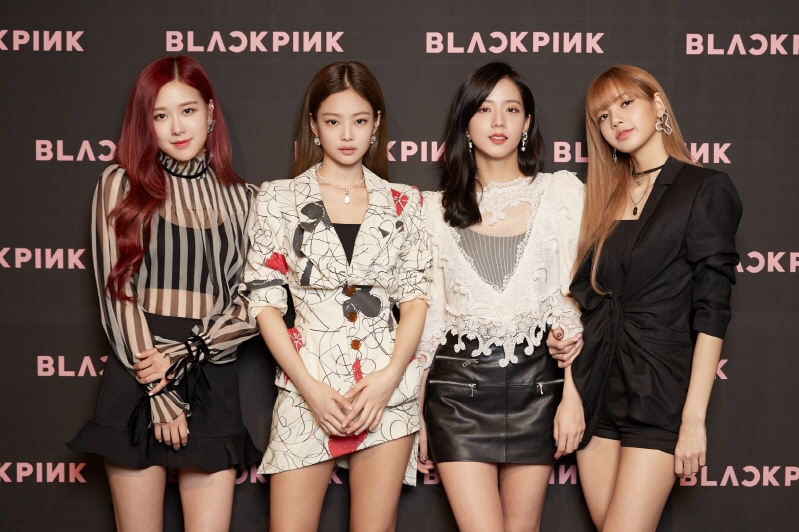 Girl group BLACKPINK pose at a press conference for the release of their first EP, “Square UP,” on June 15, 2018. (image: YG Entertainment)

The four-member group’s new record came after a hiatus of one year following the last release, an unusually long pause for the fast-changing K-pop scene.

“Even a pause of six or seven months seemed so long to us. In the one-year hiatus, we worked on more songs than these four tracks to come up with music that is more polished and more detailed,” Jennie said.

After the last two years of whirlwind success, the members said they are telling themselves to relieve the sense of burden that has come with their breakout success. “(After these two years) we have a new mindset that we will not pay attention to that (feeling of burden) and will make new attempts every time we come back,” Jisoo said.

“Personally, I focused on physique management (during the year away) as the new song required a lot of body strength for its intense performance and choreography,” member Rose said.

“It is still unbelievable that our songs have each set the record of 100 million (YouTube) views. For this album, we will not be so aspiring as to set a goal like 400 million views. We will be just very grateful if people listen to our songs,” Jennie noted.

In July, the girl band is also set for an arena tour of three Japanese cities, the first BLACKPINK concert since the band’s debut. The six-day tour will start off at the Osaka-jo Hall on July 24 and bring them to Fukuoka and Chiba.