“In regards to minor jolts and bumps there really is no reason to be concerned.”

“While some reports predict a steady decline in growth, this only refers to the growth rate, and the country’s economy will expand in absolute terms.”

“China’s 1.3 billion-person market is still in the expansion phase, and the government’s commitment to reform is steadfast.” 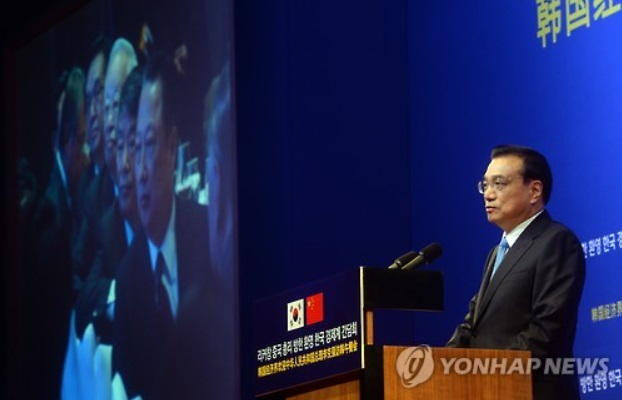 SEOUL, Nov. 1 (Korea Bizwire) – Chinese Premier Li Keqiang told South Korean businessmen Sunday there is no need to be overly concerned about the state of the world’s No. 2 economy, and that China will continue to grow at a good pace.

In a gathering with South Korea’s top business leaders in Seoul, the top policymaker said that while there may be some worries about the state of certain Chinese economic indicators, Beijing is confident that there will be no serious jolt.

He said that China is continuing to grow at around 7 percent and that the country will be able to maintain a medium to a high pace of growth for the foreseeable future.

On bilateral relations, the premier, who is in Seoul to take part in the trilateral summit meeting, said if China and South Korea joined forces, this will not only generate new momentum but help the global economic recovery process.

“If companies from the two countries join forces, they will not only do well in China but make headway in other countries,” he claimed.

The official then said that the bilateral free trade agreement (FTA) reached earlier in the year will contribute to two-way economic exchanges.

He pointed out through the FTA, Beijing pledged not only to promote trade and investment but to open its financial and communications service sectors. He said this is something that was not included in free trade pacts with other countries.

Park Yong-maan, chairman of the Korea Chamber of Commerce and Industry (KCCI), the country’s largest private economic organization, predicted the FTA, as well as the China-led Asian Infrastructure Investment Bank (AIIB), will lead to greater opportunities down the line.

South Korea joined the AIIB as one of its founding members in late March.

Park said businessmen from the two neighboring countries should take the lead to promote prosperity at the event, which was packed with more than 200 South Korean businessmen, including the owners of Hyundai Motor, LG Group and SK Group, as well as the de facto head of Samsung Group, the country’s largest family-run conglomerate.

“Once the FTA is ratified, trade and investment conditions will improve markedly that can lead to more exchanges,” he said. “This, in turn, can lead to more growth opportunities for all sides.”
China is already South Korea’s largest export market and a favorite destination for business investment.

Park then said with the neighboring countries striving to seek harmonious growth, businessmen from the two countries should also move forward to strengthen cooperative ties.

“There is a need to push forward cooperation, as well as share the fruits of such labor,” the KCCI head said. He said such a development can help establish a positive synergy in economic cooperation.

On the AIIB, the chairman said South Korea, China and the multilateral development bank should strive to expand three-way cooperative opportunities that can speed up broader Asian regional growth.

Besides local business leaders the meeting was attended by some 100 senior Chinese government and financial sector officials.