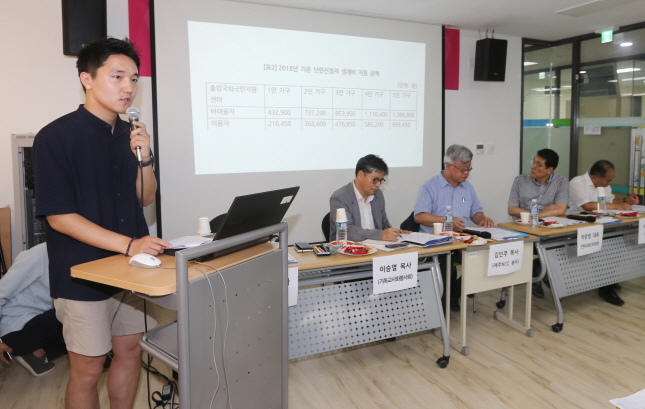 JEJU, Jul. 19 (Korea Bizwire) — As the issue regarding the acceptance of Yemeni refugees continues to divide the nation, a discussion on how Christians should treat the matter was held yesterday at the Jeju Migrants Center.

During the discussion, Abraham Lee, the executive director of The Refugee pNan, a refugee related NGO, said he favored the support of refugees through financial and educational means.

In the case that the Yemeni applicants are granted refugee status, they should be integrated into society through various means, said Lee, who also suggested that regular monitoring of the situation is necessary to make this happen.

Pastor Lee Seung-yeol of the Korean Christian Service, a volunteer group, said that the Holy Bible is certainly a book about refugees for refugees.

The pastor also claimed that if alive today, Jesus would be classified as a refugee according to the 1951 Refugee Convention.

Earlier in the month, the National Council of Churches in Korea released a statement regarding Yemeni refugees, appealing to the nation “to practice love by being neighbors to the Yemeni who are floating in the ocean of death.”

YMCA’s Korea office also said last month that the refugee crisis is an issue of human rights and peace, and that civil society in South Korea must make the first steps to ensure that peace is expanded in society.

Meanwhile, the number of refugee applicants has increased in Jeju throughout the years, reaching 1,055 this year, while Yemenis account for 549.