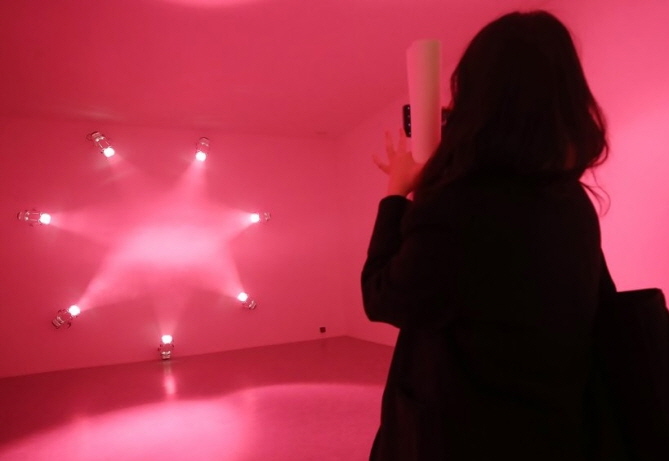 A visitor takes photos of Ann Veronica Janssens’ installation “Rose” on Jan. 28, 2020, during the media day event for the Seoul leg of CONNECT, BTS. (Yonhap)

SEOUL, Jan. 29 (Korea Bizwire) — A thick mass of fog, tinted fluorescent green, yellow and pink, instantly blinds the visitor, who, unable to recognize the environment visually, has to use their other senses to proceed.

A brief tour of the closed, round, fog-filled space, an art installation by Brussels-based artist Ann Veronica Janssens, inspires its visitors to redefine how they sense space and material.

The artwork is one of three installations to hit Dongdaemun Design Plaza in central Seoul on Tuesday in the fourth leg of CONNECT, BTS, a global contemporary art initiative in collaboration with K-pop super band BTS.

The exhibition, which involves five cities across the world, began in London’s Serpentine Gallery on Jan. 14. It was designed to dovetail with BTS’ musical philosophy, which centers around diversity, love and care for things on the periphery of life.

Like the London exhibition, the Seoul event comes with a special docent program, accessible on the official website of CONNECT, BTS, in which BTS members walk visitors through the artworks in pre-recorded videos.

“In order to recognize someone else in the midst of the green, yellow and pink fog, you have to go near to the object. Fog debilitates the vision, but it also reawakens other senses at the same time,” BTS member Jin said in his video guide for Janssens installation “Green, Yellow and Pink.”

“In the midst of the fog, I was reminded of the time when I was a trainee. Unable to look forward to whether I would be able to finally make my debut or whether people would like me, I could shake off those fears and step forward, trusting that I am with other members,” Jin noted.

The creative spirit of BTS may look like Janssens’ space if it were expressed in spatial terms, according to the exhibition’s description of “Green, Yellow and Pink.”

The Seoul exhibition includes another installation by the artist, “Rose,” as well as a massive media work by South Korean artist Kang Yi-yun, titled “Beyond the Scene.”

“The seven boys, singing in the Korean language, connected the world, going beyond the (barriers) of language and the generations,” Kang said in a presentation to the media on her show Tuesday. 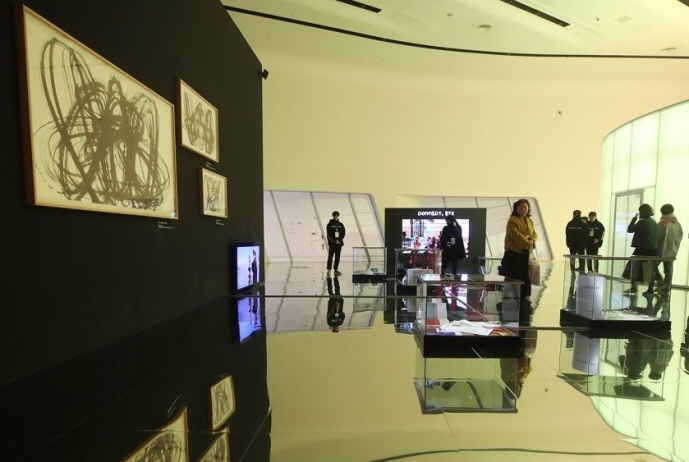 The Seoul show also features an archive of the five-city art project, documenting how the exhibitions in London, Berlin, Buenos Aires, Seoul and New York — all inspired by the discography and the global ascent of BTS — were curated.

A total of 22 artists from across the globe have joined the international contemporary art project, which aims to connect art with music and people.

The project is also part of the band’s upcoming new album, “Map of the Soul: 7,” set to be released Feb. 21, a full-length album exploring a journey of self-discovery.

The seven BTS members said in a video message delivered to a media event on Tuesday, “We hope CONNECT, BTS will be an opportunity to pay it back to ARMY and other visitors,” referring to the band’s fandom.

“It is a very meaningful (event) that lets music meet arts and connects various languages, cultures and experiences to share positive messages,” the band said.

But he said the latest exhibition tries to overcome this by giving full rein to the different identities of art and music as if “music as represented by a boat could (sail freely) in the waterway of arts or vice versa.”

The Seoul exhibition runs till March 20, and the fifth and final leg of CONNECT, BTS is scheduled to land at New York’s Brooklyn Bridge Park Pier 3 on Feb. 5, featuring British sculptor Antony Gormley.