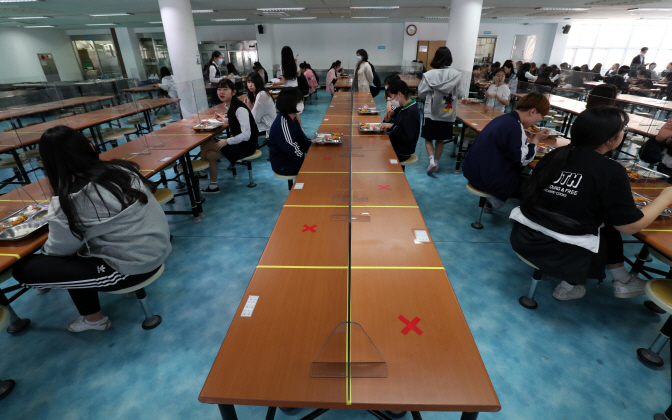 Students eat lunch at tables equipped with plastic barriers to prevent any possible spread of the new coronavirus at the cafeteria in Jungang Girls’ High School in the southeastern port city of Busan on May 20, 2020. (Yonhap)

JEONJU, May 21 (Korea Bizwire) — Seniors at Jeonbuk National University High School in the southwestern city of Jeonju headed towards the cafeteria for lunch as the clock struck 12:30 p.m. on Wednesday, their first day of school.

They followed lines taped on the floor from the classroom to the cafeteria, where they all washed their hands and had their body temperature checked using thermal imagers.

The teachers were on a constant look-out to make sure that all students had their temperature checked.

Cafeteria staff plated food in advance to minimize contact with the students, who one-by-one took a plate and headed to the tables.

The tables were separated by plastic partitions, and students sat on one side of the table as they began to eat.

Now, the bustling, cheerful mood of the cafeteria where friends would freely chat about as they enjoyed their food was nowhere to be seen. Instead, the atmosphere in the classroom was much more like that during an exam.

Students from other classrooms entered the cafeteria after waiting for a designated time period.

“It is uncomfortable to keep my mask on at school,” said Song Ho-geun, a senior student. “But it’s still great to see my friends and teachers.”

Some students showed disappointment in the quieter school environment.

“It is frustrating not being able to talk and have fun with friends like we used to,” said Jeong Jin-han, another senior student. “But it feels more like studying now that I’m here.”