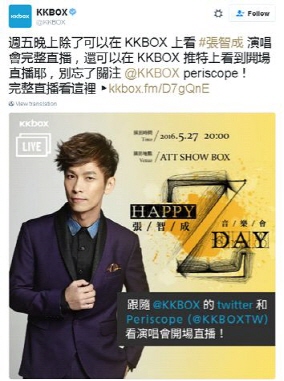 Catherine Chien, Marketing VP of KKBOX, said: “KKBOX offers the most comprehensive Asia-pop music library. This year, KKBOX’s tracks have grown from 20 million to 25 million. Also, over 2,500 artists and celebrities are longtime supporters of KKBOX. With Twitter as our social media partner, we will co-create exclusive content on Twitter for Cpop fans and artists to share their music appreciation with the world through the live communications platform.”

Margot Ling, Head of Media Partnerships of Twitter Greater China, said: “We want to bring more Chinese-language content to Twitter to make our global communications platform the live connection to Chinese culture for our users around the world. Music is something that everyone can appreciate and our KKBOX collaboration is a new and exciting way to promote Cpop to the world through real-time interactions and live conversations on our platform. We’re thrilled that KKBOX, one of Asia’s top music streaming service platforms, will regularly create unique Twitter content with established and emerging Cpop artists, as well as during music concerts and award shows.”

Lala Hsu – the Taiwanese singer-songwriter who won the Best New Artist award at the 2010 Golden Melody Awards and was crowned the champion for Taiwan’s famous singing competition One Million Star. https://twitter.com/KKBOX/status/733256249219784706

A-Lin – the aboriginal Taiwanese pop singer A-Lin got the title “A Born Diva”. She has won numerous music awards and is extremely popular within the Mandarin-speaking world. https://twitter.com/KKBOX/status/734045077044006913

Jam Hsiao – Besides winning numerous music awards in the region, Jam was the winner of 2015 Ten Outstanding Young Persons in Taiwan.
https://twitter.com/kkbox/status/736060942761369600

Derrick Hoh – the Singaporean idol singer gained nationwide recognition after emerging as the second runner up in Channel U’s Project SuperStar in 2005. https://twitter.com/KKBOX/status/730355869334921216

Twitter is an iconic service and global platform for self-expression and live conversation. Twitter has always been the best place to see what’s happening now. Whether it’s breaking news, entertainment, sports, or everyday topics, only Twitter lets you connect with people anywhere in the world with live conversation. Anything that happens, you see it first on Twitter, in more than 40 languages around the world. The service can be accessed at Twitter.com, on a variety of mobile devices and via SMS. For more information, visit about.twitter.com or follow @twitter.

KKBOX has been leading the streaming digital music scene in Asia for more than 10 years. KKBOX features the most comprehensive Asia-Pop music library and is currently available in Taiwan, Japan, Hong Kong, Singapore, Malaysia and Thailand with over 10 million users. KKBOX’s versatile platform connects millions of music lovers, artists and professionals, while its entertainment eco system grows vibrantly with KKBOX LIVE and the annual KKBOX Music Awards event that reaches more than 10 million enthusiasts around the world. For more information, please visit http://www.kkbox.com/about/.

2 thoughts on “Cpop Goes Global with @KKBOX and Twitter”