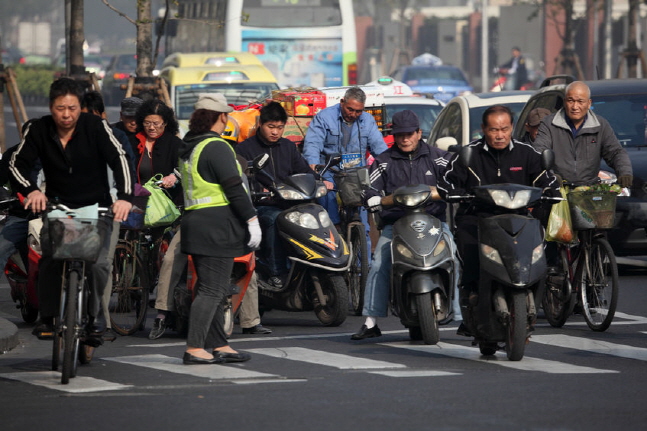 HONG KONG, CHINA, Apr. 10 (Korea Bizwire) – Corruption is a major threat faced by China and anyone who wants to do business in the country. In recent years, the Chinese government’s crackdowns in corruption has led to some success.  In the Berlin-based non-profit Transparency International’s Corruption Perceptions Index 2017, China ranked 77th with a score of 41 out of 100, a slight improvement from the score of 36 in 2014. The index ranks 180 countries and territories by their perceived levels of public sector corruption according to experts and businesspeople with a scale of 0 to 100, where 0 is highly corrupt and 100 is very clean.

While the government continues to combat corruption from the top level, it also needs the support of individuals. How do Chinese people perceive bribery acts? Are their perception any different from people of the Western culture? Prof. Hong Ying-yi, Choh-Ming Li Professor of Marketing at The Chinese University of Hong Kong (CUHK) Business School has revealed some interesting answers in her research.

With her collaborators from other universities, her research entitled “Is individual bribery or organisational bribery more intolerable in China (versus in the United States)? Advancing theory on the perception of corrupt acts” takes a look into how two cultures (Chinese, American) perceive two types of bribery: individual and organisational.

Individual bribery is bribe-giving on behalf of an individual to serve individual interests (e.g., a parent bribing a teacher in order to get favourable treatment for his or her child); whereas organisational bribery is bribe-giving on behalf of an organization to serve the collective interests (e.g., a listed firm bribes the auditor to produce fraud financial reports or a company bribes the government for policy support).

According to Prof. Hong, the distinction between individual and organisational bribery is important. “Past research suggested that cultures vary in their construals of individuals and collectives as two separate, cognitively meaningful social entities,” says Prof. Hong.

The researchers conducted several studies with hundreds of college students and working adults in mainland China and the United States. The participants were presented with a list of nine individual (e.g., a person who breaks a traffic law gives money to the police officer) and nine organisational bribing behaviour descriptions (e.g., a company gives money in order to win a bidding war). They were then asked to describe their perceptions toward the bribing behaviours via questionnaires.

To unravel the psychological mechanism underneath the difference in the cultural perceptions toward bribery, the researchers recruited a fresh batch of participants in mainland China and the U.S.

After reading some of the bribing behaviours in the previous study, the participants were asked to estimate the reasons for such behaviour. For example, an internal reason for bribery can be presented as “a person or a company does not have high moral standards” whereas “this is the social norm” is regarded as an external reason.

“Interestingly, Chinese participants made more internal attributions for organisational bribery than for individual bribery, whereas the results for the US participants were completely opposite,” she remarks.

Perception of Bribery through Bicultural Lens

To further test the cultural effect on intolerance of individual versus organisational bribery, the researchers extended their study to Hong Kong where people are being influenced by a combination of East and West cultures.

Previous research has shown that Hongkongers are bicultural in a way that they grow up in a Chinese cultural milieu and are also exposed to Western culture through education and the media.

“Cultures are like open systems and individuals may have access to more than one system; when and how the cultural system influences one’s judgment depends on factors such as contextual cues and identities,” Prof. Hong explains.

To measure bicultural identity, the team adopted the Bicultural Identity Integration (BII), which is the degree to which people experience their two cultural identities as close and compatible or distant and conflicting.

“Hong Kong people who are high in BII view their Eastern and Western identities as close and compatible, whereas those who are low in BII view their two cultural identities as distant and conflicting,” she explains. “As such, people with high BII can easily switch between the Eastern and Western culture in different situations, but those with low BII will resist the switching and react against the situation,” she adds.

Through conducting several surveys among 117 bicultural Hong Kong Chinese undergraduate students, the researchers predicted that those with high BII would show more intolerance towards organisational bribery when they are reminded of the Chinese culture and more intolerance towards individual bribery when primed with the American culture. That is, they will assimilate their judgment in accordance with the primed culture. By contrast, those with low BII are expected to behave in the opposite way.

Once again, the results confirmed the researchers’ hypotheses.

According to Prof. Hong, one possible reason of Chinese people being more intolerant of organisational bribery because lay persons perceive more agency or ‘power’ in organisations than in individuals. That is, organisations often shape individuals’ outcomes, but individuals are relatively ‘powerless’ in altering the paths of organisations.  This also explains why organisational misconducts often evoke strong public outrages in China (e.g., the infant milk formula scandal).

“In China, policies and measures may be necessary to regulate the acts of bribery at the individual level, especially those that involve close relational others (e.g., family members of politicians), as a first step toward preventing more damaging forms of bribery from exerting influence,” she says.

“In recent years, some of the anti-corruption policies and measures in China have begun targeting individuals, such as the launching of more explicit stipulations on specific behaviours by government officials and businessmen,” she concludes.