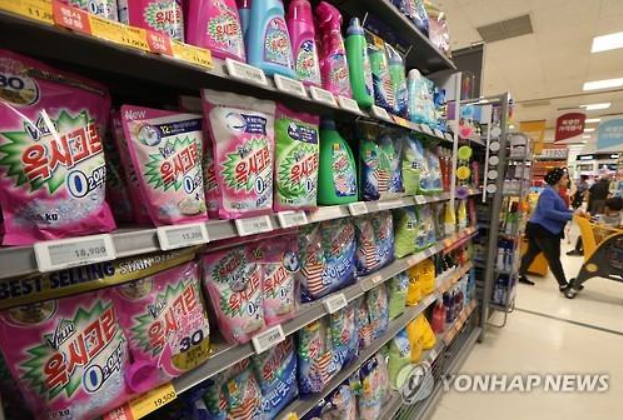 Word of the boycott continues to spread like wildfire through the internet and SNS, with calls to boycott all Oxy products. (image: Yonhap)

SEOUL, May 4 (Korea Bizwire) – Due to the controversy surrounding humidifier disinfectant from Oxy Reckitt Benckiser (Oxy), the boycott movement against Oxy has spread in all directions, leading to a drastic decline in Oxy product sales at supermarkets. Oxy, a multinational corporation originating in the U.K., had been selling a variety of products such as ‘OxyClean’ bleach, ‘OxyClean Auto Action’, ‘Water Drinking Hippopotamus’ dehumidifiers, ‘Sherry’ fabric softener, and the detergent ‘Detol’ within Korea.

Although Oxy director Ataur Rashid Safdar issued an official apology on May 2 and announced that victims would be provided with comprehensive compensation, families of the victims denounced the apology as a ploy to avoid prosecution and limit the effects of the boycott movement. Word of the boycott continues to spread like wildfire through the internet and SNS, with calls to boycott all Oxy products.

“As more than half of Oxy’s sales are related to bleach and dehumidifiers, sales of products in these categories have declined as the boycott spreads. Right now is time of the year when these products are usually in high demand, but Oxy is unable to even hold sales promotion events because of the controversy,” said an industry official.

The case is also triggering an outpouring of empathy across Korea. “I couldn’t help but identify with the cry of the victims’ parents – ‘By trying to raise my children in a healthy way, I killed them instead with my own hands’. I decided I would not use Oxy products from now on if I can help it,” said homemaker Yu (female, age 58), a regular user of Oxy products such as Detol and Water Drinking Hippopotamus.

“Since there is nothing wrong with using other brand products, I think I will be very reluctant from now on to use detergents or disinfectants that include a lot of chemicals,” Yu added.