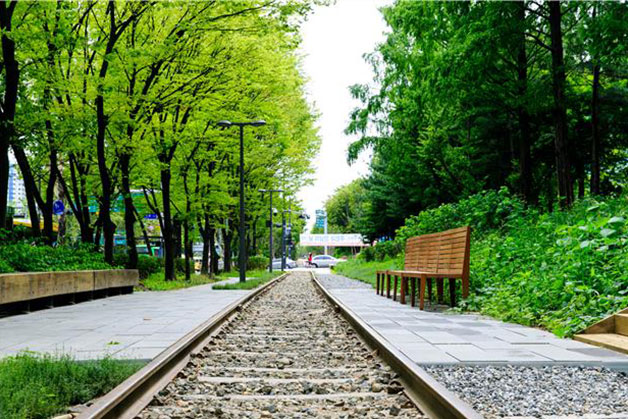 The Seoul city government plans to complete the second phrase of the project by September 2016, and third phrase by May 2017. (image: Seoul Metropolitan Government)

SEOUL, Aug. 11 (Korea Bizwire) – A discarded railway from the former Gyeongchun Line will be made available for the use of Seoul citizens as a forest road.

The Seoul Metropolitan Government announced on August 11 that it would open the “Gyeongchun Line Forest Road” by refurbishing the discarded railway of 6.3km from Kwangwoon University Station (former Seongbuk Station) to the city limits, via the former Hwarangdae Station.

As its first step, the city government made public the 1.9km sector from Godeok rail crossing to Yuksa (Army Academy) three-way intersection, which covers a total of 48,170 square-meters of land.

As the railroad contains an original type of railroad that cannot be seen elsewhere in Seoul, organizers preserved the existing railways and railway signals, while installing trails, bicycle roads, community spaces and benches.

The Seoul city government plans to complete the second phrase of the project by September 2016, and third phrase by May 2017.

A city official said, “The Gyeongchun Line Forest Road project is a city rehabilitation project offering access to the forest by preserving original facilities. By transforming the railway, which used to act as a division within the forest, the city will provide places for community cohesion.”

The Gyeongchun Line, which was opened in 1939, was single-track railway linking Seoul to Chuncheon. It was upgraded into an electrified and double-tracked line in the early 2000s by rerouting the former line. The discarded line has now been transformed into bike paths or trails for walking.