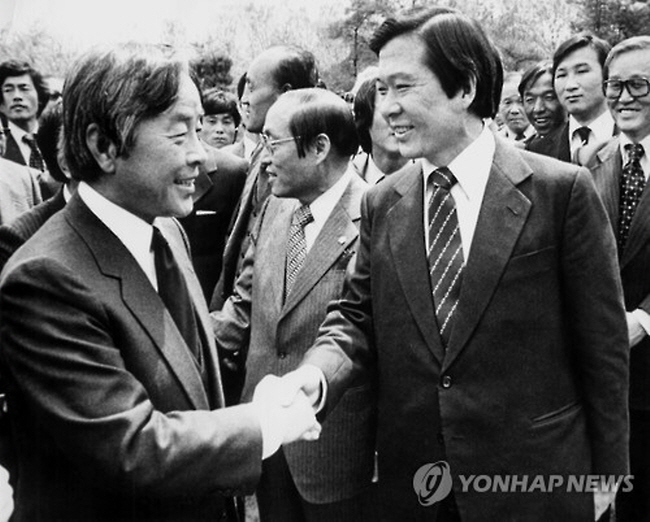 The two Kims — both iconic figures of the country’s pro-democracy movement by fighting against military rulers — dominated the nation’s political landscape for decades.

Their births and political careers in the start were very different.

Kim Young-sam was born into a rich fishing family on Dec. 20, 1927, on Koje Island, off the southeastern tip of the Korean Peninsula, when the country was still under Japanese colonial rule.

Kim survived the brutal Korean War during which he anchored a Defense Ministry’s propaganda radio program.

He was elected in 1954 as the youngest member of the National Assembly. At that time, he was in the ruling party of the late Rhee Syng-man, South Korea’s first president.

Kim Dae-jung was born to a middle-class farming family on Jan. 6, 1924, on a small island in South Jeolla Province.

He developed the resolve to fight what he saw as an increasingly corrupt government in the late 1940s, when Rhee began to steer the country toward authoritarianism.

Kim Dae-jung was expelled from the National Assembly for his anti-government activities, shortly before then-President Park Chung-hee, the father of incumbent President Park Geun-hye, seized power in a military coup in 1961.

In the wake of the elder Park’s assassination in 1979, the two Kims held hands together and led pro-democracy movements.

The two also relinquished their titles as lawmakers and went on a hunger strike.

They have since become heavyweights of domestic politics and enduring symbols of deep-rooted regionalism.

While Kim Young-sam was strongly backed by the southeastern region, Kim Dae-jung enjoyed support from the southwestern region.

Their partnership ended when they failed to pick one presidential candidate from the liberal opposition party in 1987, losing to former President Roh Tae-woo, a conservative ruling party candidate at the time.

In the next presidential election in 1992, Kim Young-sam was elected and laid the foundation of a peaceful power transfer in the country.

During his presidency, he had his two generals-turned-predecessors indicted on mutiny and treason charges stemming from a coup.

Kim pardoned the two convicted military strongmen — Chun Doo-hwan and Roh — at the end of his term.