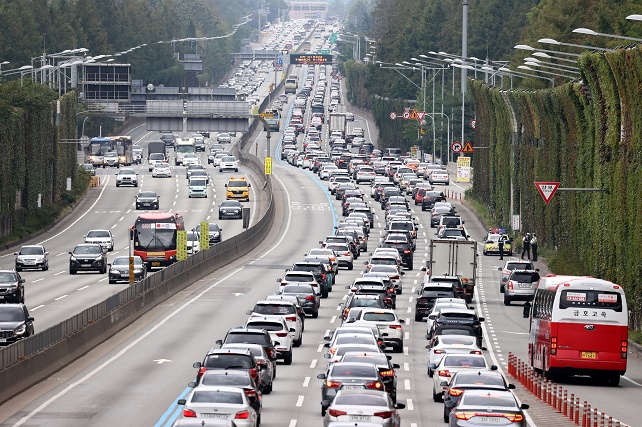 Cars line up on an expressway during the recent extended Chuseok break that ran from Sept. 30 to Oct. 2, 2020. (Yonhap)

SEOUL, Oct. 5 (Korea Bizwire) — Traffic volume on the country’s expressways during the recent extended Chuseok holiday dropped 10 percent from a year ago amid the COVID-19 pandemic, data showed Monday.

Traffic counts along the national expressways came to a daily average of 4.54 million vehicles during the five days from last Tuesday to Saturday, according to the data from Korea Expressway Corp. submitted to Rep. Park Sang-hyuk of the ruling Democratic Party.

The five days include the day before and after the three-day Chuseok holiday, which was from Wednesday to Friday.

The number represents a decline of 10.7 percent from the average daily traffic volume recorded during the same five-day holiday period, from Sept. 11-15, last year, according to the report.

Chuseok, the Korean fall harvest celebration and one of the country’s biggest traditional holidays, usually serves as a chance for family members to visit their hometowns or travel.

The government had initially expected traffic volume to plunge about 30 percent during this year’s Chuseok holiday week from last year, as people were discouraged from visiting their hometowns due to concerns over another surge in coronavirus infections.

But the smaller-than-expected decline in traffic during this year’s Chuseok break indicates that many people opted to drive their own vehicles to travel instead of using public transportation that carries higher risks of exposure to the virus.

The country has traditionally lifted expressway tolls during the Chuseok holiday each year. But the government held off the benefit this year to discourage nationals from long-distance travel and avert mass infections of the new coronavirus.

The report also showed that sales by expressway restaurants, stores and other service providers plunged about 60 percent to a daily average of 3.8 billion won during the Chuseok holiday this year, compared with last year.

As part of virus curbs, sitting at expressway restaurants and cafes was prohibited and only takeaway food services were allowed this year. 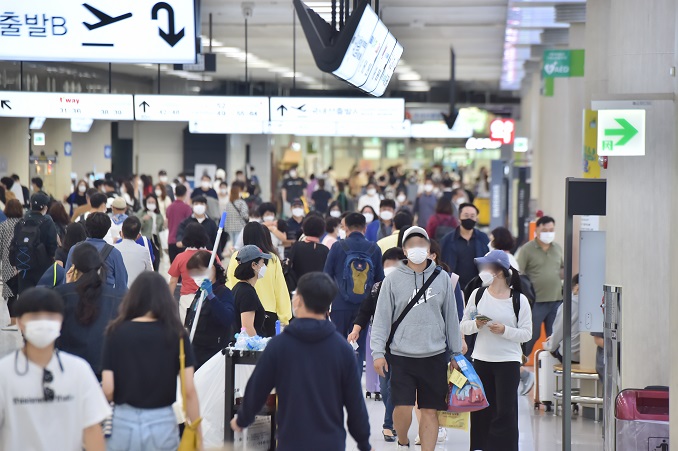 Travelers head to the departure hall of Jeju International Airport on the southern resort island of Jeju on Oct. 4, 2020. (Yonhap)

Meanwhile, as many as 860,000 people used domestic airports during the five days from Wednesday to Sunday, separate data showed, despite the government’s advice against overseas and local travel to fight against COVID-19.

According to Korea Airports Corp. (KAC), the number of people who used domestic airports, excluding Incheon International Airport, during the period was tallied at 862,697, which stands at 67 percent of 1.28 million airport users recorded during last year’s Chuseok holiday.

Considering that most international flights have been suspended due to the coronavirus outbreak, however, the actual decline in local holiday air travelers was not that large.

As for domestic flights, the number of passengers decreased by only 17 percent from the previous year.

By region, the airport on Jeju Island, the nation’s top travel destination, was used by 325,618 people during the holiday, while Seoul’s Gimpo airport was used by 295,218 people.

KAC officials speculated that the smaller-than-expected decline in local air travelers was attributed to many people choosing to travel to enjoy the extended holiday instead of visiting their hometowns for family reunions.