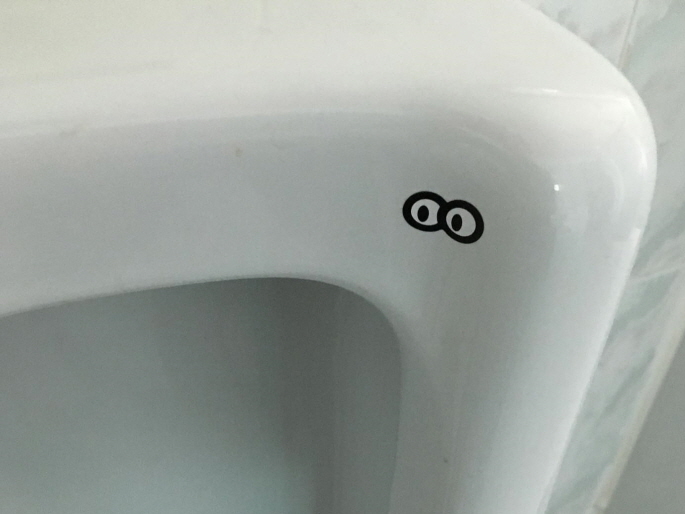 The project aims to encourage men to sympathize with the fear of illegal filming that women feel when they use public restrooms. (Yonhap)

The pictures were marked with a hashtag, ‘It’s just a sticker.’

Citizens buy eyeball-shaped stickers on their own, attach them to toilets, take “shots” of their own and repost them to “Adultboy.”

The project aims to encourage men to sympathize with the fear of illegal filming that women feel when they use public restrooms.

“I felt that men didn’t feel the fear of illegal filming at all as they never experienced it,” “Adultboy” said.

“The purpose of this project is to have people experience fear using eyeball-shaped stickers that resemble camera lenses,” he further added.

“This is just a sticker,” he said to men who were surprised to see a sticker that looked like an illegal camera lens.

At the same time, the project is also aimed at delivering the impression that women have had to listen to not be deemed as “sensitive” by men.

Many citizens are said to have voluntarily joined the project in sympathy with the cause, taking pictures of toilet stalls with eyeball stickers and posting them on social media.

Mostly male feminists sent the pictures, saying that “they are willing and excited to participate the campaign as a male feminists”. There were also women who had their boyfriend join them.

However, there was also a backlash from other men. “Adultboy” even received death threats last year when his personal information was released on community websites popular among men.

He reported that “male feminists are easily isolated and alienated by other men, just because they are feminists,” adding, “The reason why there is meaning in the participatory project is that male feminists can join together.”