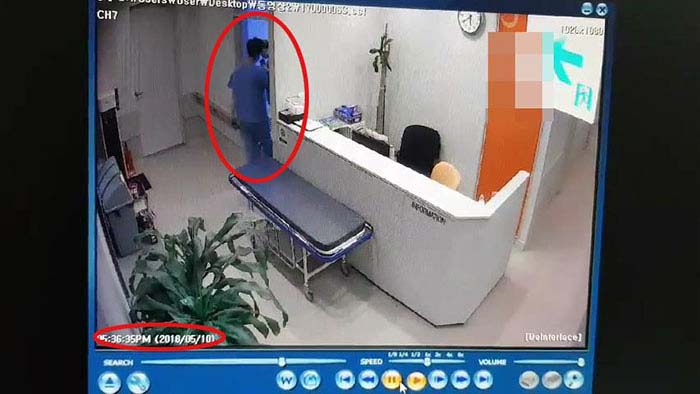 A footage of an amateur entering the operation room. (image: Yonhap)

This is a scene from the popular TV drama “Life”. Unfortunately, the drama happened in the real world in Busan.

At an orthopedic clinic in Busan, a salesperson conducted a lengthy surgical procedure, chipping bones on the patient’s shoulder. The patient failed to awake from anesthesia, and went brain-dead.

How could this happen?

Yeongdo Police Station in Busan said on September 7 that a surgical procedure known as acromioplasty went awry. In an acromioplasty, a doctor makes three surgical incisions on a patient’s shoulder, removes inflammation using endoscopes, and flattens the outside of the shoulder bone by chipping its edge.

The salesman, who delivered components of the endoscopes to the clinic, was familiar with the device.

In addition, the salesman learned how to do the surgery over-the-shoulder, the police estimated. For sales purposes he attended anatomy conferences and learned how to make medical incisions.

The police said that the clinic’s orthopedist was treating outpatients while the salesman was conducting surgery. The doctor, as the upper hand, seemingly pressed the salesman to do the surgery, the police think.

After the surgery, however, the patient’s condition was overlooked by both the doctor and the salesman, leading to brain damage.

The police are trying to find out if the same thing has happened in the past, as they found nine video clips of the salesman entering the operating room.

The concerns over the so-called “proxy-surgery” practice, in which a doctor delegates second or third-year residents to perform surgery, has been raised before. Surgery conducted by amateurs, however, is relatively unknown.

Even though it is a totally different story, the practice goes easily unnoticed, unless there’s a whistleblower from the inside.

This case prompted the police to propose a “surveillance cams in surgery rooms” policy to the Ministry of Health and Welfare. The Korea Medical Association, nevertheless, is against the idea.

There is also a concern over the soft punishment. A doctor who orders proxy-surgery only gets a six-month suspension from practicing – twice as long as the three months mandated in the past after a revision last month.

“Without taking stern measures,” said An Gi-jong, the representative of Korean Alliance of Patients Organization, “Patients will only distrust medical professionals even more.”