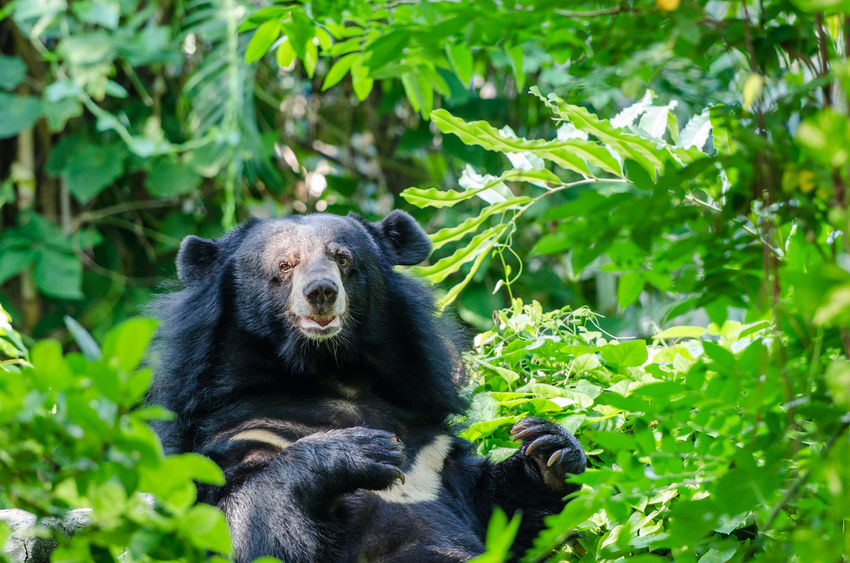 Currently the number of the Asian black bears in Mt. Jiri is 34.(image: Kobizmedia/Korea Bizwire)

SEOUL, July 10 (Korea Bizwire) – An ecological corridor will be created to link Mt. Jiri National Park with Mt. Deogyu National Park in the west as part of an effort to provide a wider habitat for the Asian black bears.

The National Nature Trust said on July 1 that it would commence, in partnership with the Ministry of Environment, Korea Expressway Corp., and the Jangsu County Government (North Jeolla Province), a project to restore the old Sachi Pass that has been destroyed in the process of building the 88 Olympic Expressway and local roads so that the bears can freely move between the two mountains.

A habitat corridor, wildlife corridor or green corridor is an area of habitat connecting wildlife populations separated by human activities or structures (such as roads, development, or logging). This allows an exchange of individuals between populations, which may help prevent the negative effects of inbreeding and reduced genetic diversity (via genetic drift) that often occur within isolated populations. Corridors may also help facilitate the re-establishment of populations that have been reduced or eliminated due to random events (such as fires or disease). (Wikipedia)

The National Nature Trust is a special corporation established to conserve natural assets of the country with donations from citizens and corporations.

A trust official said, “Given the Sachi Pass is the most important gateway for the bears inhabiting in Mt. Jiri to move toward Mt. Deogyu through the Baekdu Mountain Range, we decided to begin the restoration project jointly with the Korea Expressway Corp. and the Jangsu County Government.”

The partners to the project will close off about a 1-kilometer section of County Road No. 743 in 2015 when the 88 Olympic Expressway expansion project is completed and create an ecological corridor in the form of a tunnel underneath the local road. They will also plant oak trees so that the bears can feed on the acorns, with fences to lead them to safe paths away from traffic.

The trust has already purchased 6,085 square meters of farmlands around the area with the money donated by the environmentally conscious citizens and Ram Research Korea. The Ministry of Environment expected that the restored ecological pathways would give the bears and several other wild animals to move farther afield and thereby increase their chances of survival.

The Asian black bear (Ursus thibetanus), also known as the moon bear or white-chested bear, is a medium-sized species of bear, largely adapted for arboreal life, seen across much of the Himalayas and the northern parts of the Indian Subcontinent, Taiwan, Korea, northeastern China, the Russian far east and the Honshū and Shikoku islands of Japan. It is classed by the IUCN as a vulnerable species, mostly due to deforestation and active hunting for its body parts. The species is morphologically very similar to some prehistoric bears, and is thought by some scientists to be the ancestor of other extant bear species. Though largely herbivorous, Asian black bears can be very aggressive toward humans, and have frequently attacked people without provocation. The species was described by Rudyard Kipling as “the most bizarre of the ursine species.” (Wikipedia) 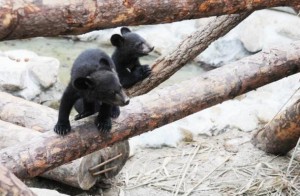 The National Park Service’s rangers found on March 25 two additional cubs while replacing the radio transmitter of a female bear, making the number to 35 from 28 last year including five newborn babies over the winter.(image:The Ministry of Environment)

Currently the number of the Asian black bears in Mt. Jiri is 34. The National Park Service’s rangers found on March 25 two additional cubs while replacing the radio transmitter of a female bear, making the number to 35 from 28 last year including five newborn babies over the winter. One bear was killed by a snare set by poachers.