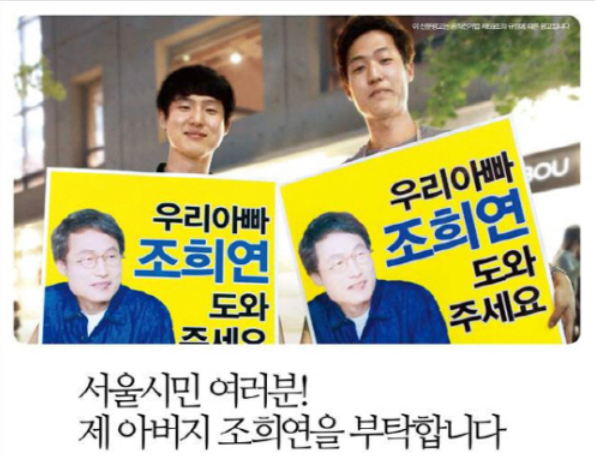 Two sons of candidate Cho were holding a placard with a supporting message for his father which reads “To Seoul Citizens, Please Help My Daddy Cho (to be elected).” (image: candidate Cho Hee-yeon’s election camp Facebook posting)

SEOUL, June 04 (Korea Bizwire) – Nearly every Seoul citizen had not the faintest idea who he was and even wasn’t aware of the fact that he had run as a candidate for the Seoul Education Superintendent in the local election, which was held on June 4.

His approval rating couldn’t score a two-digit number throughout most of the election period, showing such a meager 8.9 percent support at local opinion polls conducted on May 27, only a week before the election day. He was an “invisible” man indeed.

His name is Cho Hee-yeon, 57, professor of sociology at Sungkonghoe (Anglican Church) University in Seoul, candidate for the liberal camp in the race and according to exit polls he is likely to become the next education policy chief in the city of Seoul, well known to the world for its passion and obsession with education.

If the forecast of the exit poll is correct, the result will become one of the most dramatic turns of events in South Korea’s local election history. The race for Seoul’s next education czar, in the first place, didn’t attract much attention from Seoul citizens since many voters paid more interest in the race for Seoul’s next mayor.

In fact, overall election dynamics and atmosphere had proceeded overwhelmingly unfavorable for Professor Cho until quite recently. The streets were plastered with posters and banners hung by other “well-publicized” candidates: Koh Seung-duk, a star lawyer and national celebrity who was leading the race with the comfortably highest approval rating of about 25 percent.

And then the runner-up Moon Yong-rin, incumbent Seoul education policy head and former education minister who showed a support rating of about 12 percent, a figure as of May 27 in the previous poll results.

Unexpected Reversal of Fortunes for Candidates for Seoul Education Chief 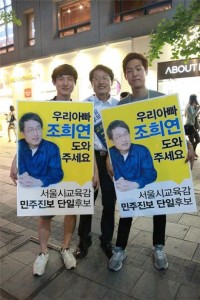 Candidate Cho was an “invisible” man in this education chief race. But his son’s message which struck a chord with many Seoul citizens have lead to a dramatic turn of events in South Korea’s local election history. (image: candidate Cho’s Facebook)

In a matter of a week, however, such an unexpected reversal of fortunes has played out. On May 29, there emerged an ‘attention-grabbing’ posting on Daum Agora, Korea’s largest discussion board, written by Cho Seong-hoon, college student and second son of the candidate Cho.

Cho Junior appealed to Seoul citizens that they pay more attention to his father by saying, “To my great disappointment, this election seems to have everything to do with a candidate’s national fame. Unless a candidate has any recognition among the voters, he has no chance to be ‘justifiably’ evaluated and thus chosen.”

“My fellow citizens, this one thing is certain: My father is a man of integrity. He has walked in the sincerity and uprightness of his heart, always considered and cared for other people first, not his own interest. This is an obvious truth since I’m the one who has kept a close watch on how he lived up to what he’s been saying throughout his life.”

This supportive message by the candidate’s son prompted an instant response — largely favorable comments ensued — among online users, garnering more than 300,000 views in a matter of hours. And this single SNS message in itself played a significant role in raising his father’s profile among the voters.

And On May 31, two days after Cho junior’s posting became the top topic in the increasingly interesting election period, another sensational posting on a social networking site — this time on Facebook, became the center of interest across the nation. Candy Koh, daughter of the frontrunner Koh Seung-duk, created a stir by calling for ousting none other than her own father, saying he is not “qualified for the education chief” accusing him of being a negligent father when it comes to education and caring for his kids.

Another Posting by Daughter of Front-runner Rocked the Election Dynamics

This Facebook posting by Koh’s daughter, 27, a law school student in the U.S., proved a “game-changer.” Koh was a clear favorite to become Seoul’s next education superintendent. Koh was reportedly harnessing his high public profile to gain the upper hand for the top education post.

As things were developing unfavorably for Koh after the daughter’s posting, Koh held a press conference on June 1, in an apparent attempt to reverse the tide. However, his press briefing rather backfired. Koh raised a possibility of political scheme behind his daughter’s “smear campaign” on the SNS site. And he said the camp for Moon, the second runner, might be involved in this unexpected event.

As the race for the Seoul education chief turned all of a sudden into a mudslinging match between Koh and Moon, Seoul citizens have come to a new understanding of the good points of the candidate Cho — largely in favorable ways.

And most Seoul citizens gave the cold shoulder on Koh’s press conference because he didn’t mention any single word regarding his daughter’s point of issue raised: “Why you were so negligent on us?” Local online community sites confirmed the general opinion about this. Many citizens said Koh should have expressed a sincere apology about the issue and that might have played a positive effect to make up for his lost approval rating.

Right before the election day, on June 3, candidate Koh reportedly cried out at the top of his voice by saying “I’m really sorry, my daughter” on the stump in his last-minute campaign on the streets. Reportedly, Candy Koh responded by commenting  “Oh..My” on her Facebook to a video in which her father was crying  out on the stump.

But it’s too late now. Seoul citizens seemed to have already made their decisions and the final results have turned out today. Interestingly enough, Chung Mong-joon, a seven-term lawmaker and ruling party challenger for the Seoul mayoral race also suffered from his son’s “thoughtless” posting on his Facebook late April.

Chung, who is a son of late Chung Ju-yung, the founder of Hyundai Group, had to apologize for his son’s controversial posting. What was the posting of Chung’s son about? The criticism-sparking posting goes like this:

In a similar accident, other nations respond rationally, but our people scream at the President even though she visited the site and told them she could do her best to help rescue efforts. When people are extremely uncivilized, you can’t expect a President to become a God-like being and meet people’s every need. People form a nation. When people are uncivilized, no wonder the nation is uncivilized.

Empathic Ability to Win over Voters and Consumers

The final election results have yet to be officially confirmed. But this local election has demonstrated that social media is still the most powerful form in shaping up public opinion among the voters in a political campaign. More than that, a message that can resonate with your key audience – when penetrating the target group’s lives and thoughts — can be a game-changer.

That’s why the “empathic ability,” an ability to feel that you understand and share another person’s experiences and emotions, is increasingly important in this society. Every effort to teach empathy deserves, in this regard, utmost importance. Learning the power of empathy able to ease someone’s pain and grief, and being joyous upon someone’s happiness, might be the best way to win over not only swing voters in the election season, but increasingly picky consumers in the business world.