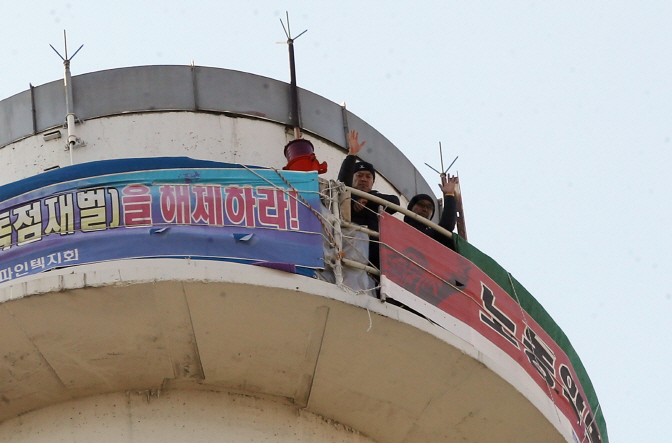 Hong Gi-tak, a worker at FineTek and former leader of the union chapter, and secretary-general Park Jun-ho began their “smokestack sit-in” at the power plant in Seoul in November of last year. (image: Yonhap)

After checking the health of the workers, the medical professionals stated that they were worried that the onset of the upcoming winter months could cause lowered immune levels, making the workers susceptible to even minor illnesses.

Hong Gi-tak, a worker at FineTek and former leader of the union chapter, and secretary-general Park Jun-ho began their “smokestack sit-in” at the power plant in Seoul in November of last year, calling for Starflex, FineTek’s parent company, to carry out its promise to normalize operations at the factory.

Today marks the 393rd day that the strike has been ongoing. The medical personnel returned to the ground after two hours of medical checkups and consultations with the workers.

Dr. Hong Jong-won of the Association of Physicians for Humanism, one of the three medical experts that performed the checkup, said nutritional imbalance has become worse for the workers, who have spent more than a year on the smokestack.

“The weight of the workers has decreased by 10 percent, and the worsening of their immunity levels is worrisome,” said the doctor, who added that the workers suffered neck and back pain after being confined to such a small space. 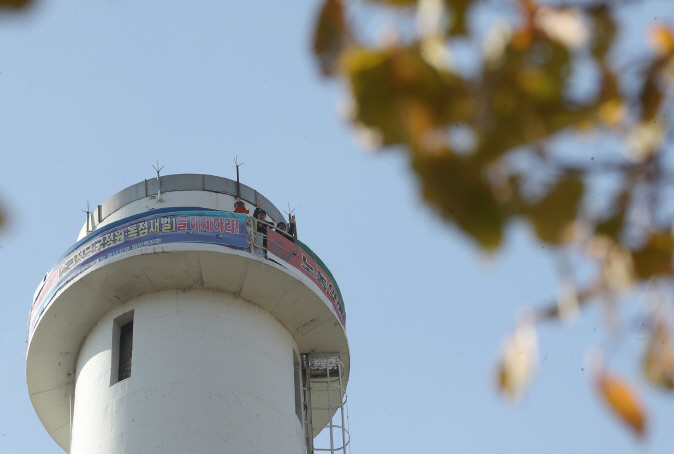 This is the fifth time that medical experts have gone up the smokestack to perform medical checkups on Hong and Park.

The doctor also said that the two men are exercising intensely, trying their best to maintain tiptop physical shape.

“Due to their strong will, they seem to be able to withstand the lesser pain.” The doctor also advised the duo to keep their hands and feet warm.

The medical experts also asked that the government show more interest in the protest efforts. “I hope that the negotiation talks will go well,” said Dr. Hong.