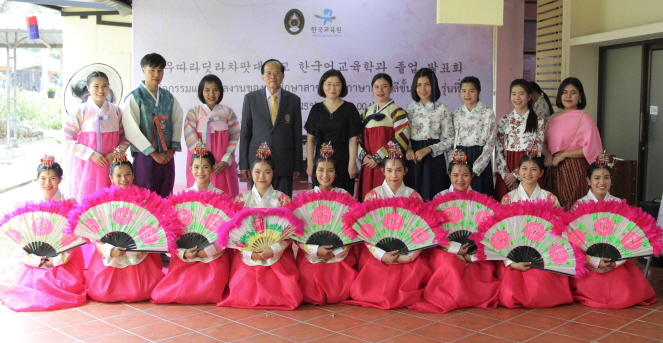 SEOUL, Apr. 29 (Korea Bizwire) — For the first time in Southeast Asia, students of the Korean language education department will be graduating in Thailand.

The Korean Educational Institute of Thailand announced on Sunday that it held a graduation ceremony from the Korean language education department at Thailand’s Uttaradit Rajabhat University on April 25.

The graduation presentation, held at the Korean Language Education Research Center at the university, included the presentation of mock Korean language classes for prospective middle and high school graduates and a conversation with an incumbent Thai senior teacher.

The department of Korean language education at Uttaradit Rajabhat University, which was the first of its kind in Southeast Asia when it was established in March 2014, has been operating as a five-year program, and will produce 15 graduates for the first time this year.

Currently, 140 Korean-language scholarship students selected by the Thai Ministry of Education from 2013 to 2016 have been appointed as secondary school teachers since 2016 after receiving education in Korea and Thailand under the supervision of the South Korean Ministry of Education and the Education Institute.

The Ministry of Education will push for a project to support Thai universities to train Korean language teachers starting this year to foster teachers who could teach Korean, in order to provide the best quality education for elementary, middle and high schools with the largest number of students from around the world learning Korean.

According to the education institute, 37,401 of some 130,000 students learning Korean in elementary, middle and high schools around the world were Thai students as of the end of last year.