“I do believe there exists the lowest limit for the nominal interest rate, but we cannot say the current rate has reached such a limit. Kore may need to further reduce the key rate depending on how the global economic condition develops in the future.”

“If the U.S. raises its interest rate and thus funds start flowing out from developing countries to advanced nations, we may not be safe from such a shift. However, the impact will be limited as we have differentiated market conditions from others and our economic fundamentals are much stronger than those of other developing countries.”

- Lee Ju-yeol, governor of the Bank of Korea 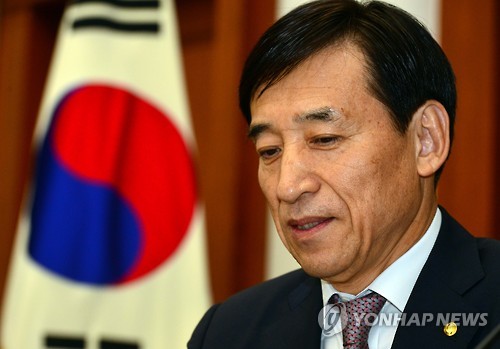 Lee Ju-yeol, governor of the Bank of Korea (image: Yonhap)

SEOUL, Sept. 17 (Korea Bizwire) — The chief of South Korea’s central bank on Thursday acknowledged a further reduction of the country’s key interest rate may become necessary depending on economic conditions, saying the current rate is not the lowest possible limit.

Following four rounds of rate cuts, the country’s policy rate has remained at the record low of 1.5 percent since June this year. The central bank’s monetary policy board again left the key rate unchanged for the third consecutive month last week.

Bank of Korea Governor Lee Ju-yeol said the low interest rate was intended to help revitalize the local economy amid growing uncertainties stemming from an economic slowdown in China and a looming U.S. rate hike.

Lee, however, noted this did not mean an imminent rate cut.

When asked about the possible impact of a U.S. rate hike on the local economy, the central bank chief said the impact will likely be limited partly due to what he called a “gradual” rise of the U.S. interest rate and South Korea’s differentiated or stronger economic fundamentals than most of other developing countries.

The U.S. Federal Reserve is set to announce its decision on its interest rate early Friday (Seoul time).

Lee said the Federal Reserve was widely expected to start raising the interest rate at least before the end of the year, if not this week.

However, unlike in the past, such as in the early 2000′s when the Federal Reserve raised its key rate through 17 consecutive sessions, the BOK governor said the much-anticipated U.S. rate hike will likely be limited to less than four times in a 12-month period.

“Based on what the Fed has communicated to the market so far, the market believes the Fed will move to raise the interest rate at less than four out of eight rate-setting sessions in a year,” he said.

A U.S. rate hike could be detrimental to developing economies as it may trigger a massive capital outflow as investors may seek new investment opportunities in advanced and relatively safer markets, such as the United States.