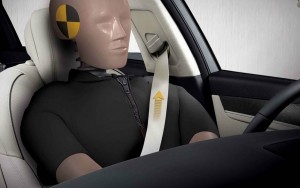 SEOUL, Korea, Dec 12 (Korea Bizwire) – On December 12th, Hyunday Mobis announced that it had recently finished its Active Seatbelt(ASB) development project and started commercializing ASBs by having them installed in new Genesis that was just released.

ASB is a smart safety system designed to minimize the injuries of the passengers with a special motor inside that controls and firmly fixes the belt in advance of sudden stirring or a possible accident. Especially, the ASBs by Hyundai Motors can also help prevent an accident by intensively tightening the seatbelt when the car comes too close to the preceding car or sidelines on the road so that they can alarm the driver before the car comes to a sudden stop or rapid turning.

According to a research, when ASB is applied, the neck injury of a passenger can be improved by 64% and the other types of injuries 10-20% at most.

Hyundai’s ECU(Electric Control Unit)-installed ASB has 40% less assembling parts compared to other manufacturer’s resulting in less weight. In addition, its motors are known to make much less noise. Particularly, a single integral ECU is installed for both driver’s seat and passenger’s seat, and even the problems of electric wave interference by other devices in the vehicle and the possible errors that could be generated by vibrations have been eliminated as well according to a Hyundai representative.

Cheol-su Kim, a vice president at Assembling Parts Manufacturing Division of Hyundai Mobis said, “global automobile assembling part makers are recently putting heavy investments in procuring ASV(Advanced Safety Vehicle) technology, and Hyundai Mobis is among the few that has procured the capabilities to run the entire safety system business and to design the systems themselves.”

For reference, ASBs were first applied in EQUUS series by Hyundai Motors in year 2009 and have been installed mostly in large sedans ever since. Now with the domestic production of ASBs by Hyundai Mobis, it is forecasted that they will be further installed in mid-to-small-sized cars.