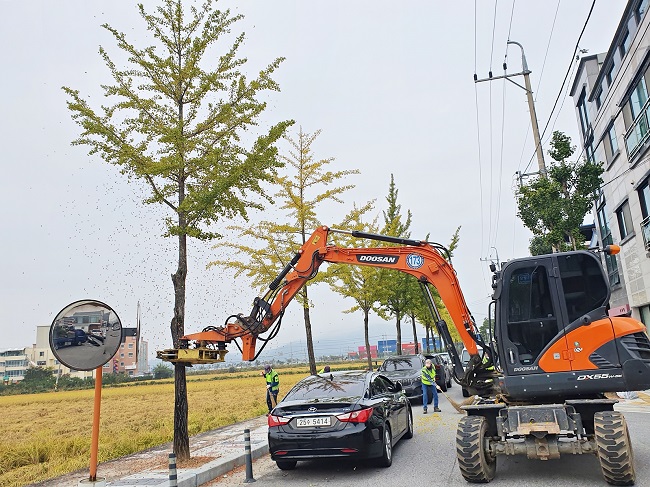 CHUNGJU, Oct. 22 (Korea Bizwire) — The city of Chungju in North Chungcheong Province is distributing ginkgo berries, known to give off a distinct, foul scent, to be used as an eco-friendly pesticide on local farms.

Ginkgo trees are resilient against insect damage and have air purifying qualities, and are suitable for streets and roadsides.

In autumn, however, ginkgo berries that blanket streets and sidewalks are a common cause of complaints due to their off-putting smell.

In response, Chungju has been collecting berries seeds since 2016 using specialized harvesting machines before they fall from the trees.

Collected seeds, instead of being discarded, have been distributed to local farms to be used as an eco-friendly pesticide.

This year, the city collected 15 tons of ginkgo berries from 2,000 trees located in the city for distribution among farmers.

The ginkgo leaves and seeds contain bilobol and ginkgoic acid, which are effective in fending off insects and pests, making them effective as an eco-friendly pesticide.