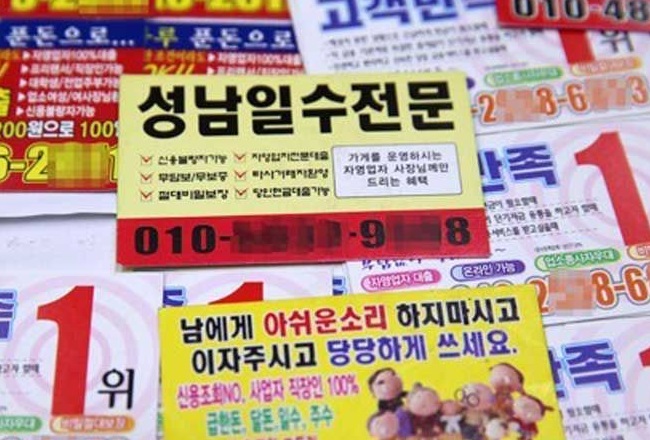 SEOUL, Jul. 10 (Korea Bizwire) — In February, a man in his 40s secretly took out a loan for 1 million won from a loan shark, without his family’s knowledge, under the premise that he would be paying it back within a week.

Left with only 600,000 won in his hands after 400,000 won in interest was deducted, the man proceeded to take out another loan totaling 1.5 million won that included the first loan.

The actual cash for the two loans he received was 900,000 won minus the pre-deducted fees.

But when the man was late on his promised payment, he was instantly 12 million in debt, after being charged extra interest to extend the repayment period.

The interest rate calculates to 8,207 percent yearly, which is much higher than the legal interest limit of 24 percent.

To put an end to such illegal loan practices, the Seoul Metropolitan Government will be cracking down on 70 enterprises suspected of carrying out illegal lending activities during a two-month period from July 9 to September 7.

The city will be working closely with the Financial Supervisory Service to impose strong penalties against money lenders that have broken the law.

Officials will be looking for money lenders that charge illegal interest rates far exceeding government regulations, as well as illegal practices that occur in the process of collecting the debt.

Money lenders will be fined, their operations suspended or even have their business licenses cancelled if found to have broken the law.

The city government revealed an investigation into 103 money lenders was carried out earlier in the year between February and April, in which 40 entities were fined, 15 were ordered to suspend operations for a given period, and four businesses had their license cancelled.

In all, a total of 91 administrative actions were issued against unlawful businesses.

Debtors who feel they have fallen victim to such illegal money lending services can call for help by reporting illicit activity via the city’s website at http://economy.seoul.go.kr/tearstop or by calling the Dasan Call Center at 120.

One thought on “Government to Crack Down on Illegal Loan Sharks”