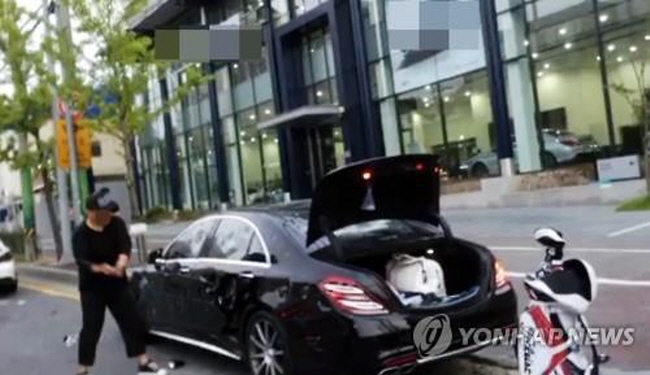 A disgruntled owner of a Mercedes-Benz AMG S63 smashes his car with a golf club in protest in Gwangju on Sept. 11. (image: Yonhap)

The move is in response to a frustrated consumer publicly smashing his 200 million-won (US$169,200) Mercedes-Benz AMZ S63 with a baseball bat and a golf club in Gwangju, a city about 330 kilometers south of Seoul, on Friday after the local dealer of the German luxury car brand repeatedly rejected his request for a refund.

The driver claimed that his car’s ignition cut off three times while it was being driven, which he argued could have led to a serious accident.

At present, carmakers are required to make repairs free of charge for defects within the warranty period and may even recall vehicles with serious problems later on, but they do not have to give refunds or exchange the cars.

South Korea’s Fair Trade Commission does have a consumer complaint relief system that covers vehicle disputes, but it is only a recommendation that is not legally binding.’

“There is a need to look at the matter from the perspective of consumer safety,” said Kim Yong-seog, head of the transportation ministry’s automobile safety and service planning office. “A balance must be struck between consumer rights and those of the carmaker.”

The official said the government is looking into practices carried out in foreign countries regarding vehicle refunds and exchanges.

While no formal complaints have been made by other car owners of the model that was smashed, the government could start an investigation into the matter, he said, adding Mercedes-Benz Korea has been ordered to submit data on its vehicle so it can be checked.

Related to the controversy, Rep. Shim Jae-chul of the ruling Saenuri Party proposed a bill that sets clear guidelines for serious defects that would require carmakers to make a full refund or exchange the car with a new one.

The bill proposes carmakers take full responsibility if a car breaks down more than twice within 30 days of purchase and if the total repair time of the car exceeds 30 days within a year of purchase.

The lawmaker’s office said that in the United States the federal lemon law was enacted in 1975 that protects consumers from defective products.

Mercedes-Benz Korea, meanwhile, said it is in the process of checking the validity of the complaints lodged, hinting that the problem may involve the eco start-stop mechanisms of the car. The system is designed to save gas by cutting off the ignition of a car when it is in idle mode. Once the driver lifts his or her foot off the break pedal, the car is designed to start up again.

The local dealer said after reaching the market in November 2013, it has sold 614 AMG S63 models in the country.