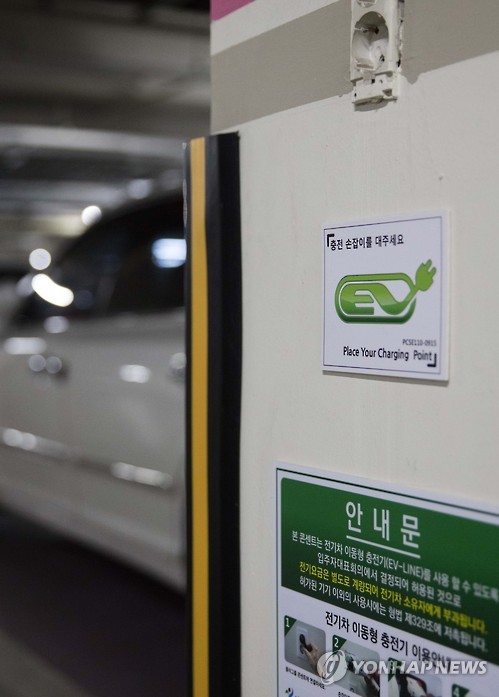 An electric vehicle (EV) charger is set up at an apartment parking lot in Seoul. (image: Yonhap)

SEJONG, Nov. 8 (Korea Bizwire) – The Environment Ministry said Tuesday that it will drastically improve the nation’s insufficient charging infrastructure for electric vehicles (EVs) by expanding the number of EV chargers across the nation.

The improvement of the EV charging infrastructure will lead to a big expansion of the supply of EVs in the country like the United States, Japan and Norway, the ministry said.

Charging times for super and regular chargers are 20-30 minutes and 4-5 hours, respectively.

At present, the Seoul government provide a subsidy of 4 million won (US$3,500) to each EV buyer to help install a personal charger, a policy designed to expand the supply of electric cars in the country.

The state-run power monopoly is also pushing for a project to set up EV chargers at apartment complexes nationwide.

A total of 366 apartments applied for the introduction of EV chargers in KEPCO’s first applicant acceptance period from Oct. 7-21.