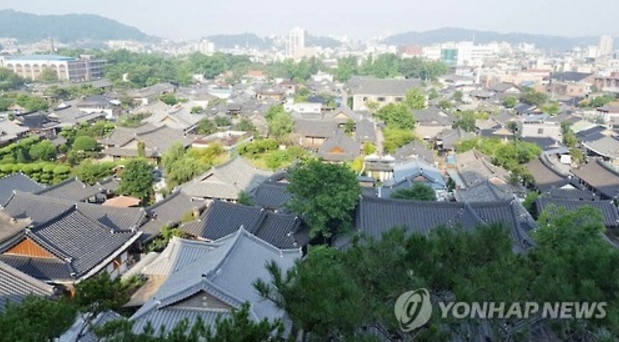 The popularity of the village is mainly due to the well-preserved hanok houses that residents live in, but hallyu (the Korean wave) also has contributed to a growing interest among tourists from overseas.

Due to the soaring popularity of these types of neighborhoods, certain local governments have initiated the construction of their own hanok villages or hanok experience complexes.

Unlike Jeonju Hanok Village, which was built naturally over time, and has been inhabited by real residents for as long as it has been in existence, these newly built towns and complexes are built solely for tourism purposes.

Namwon, a city in North Jeolla Province, recently opened ‘Namwon Yechon’ – a new hanok experience village that has extravagant hanok facilities, in mid-July. Built on a 17,400 square-meter property, Namwon Yechon consists of 15 hanok houses, ponds, and pavilions. A total of 27.2 billion won ($24.4 million) was invested in the project.

Other cities including Ulsan and Cheongju are also planning on joining the hanok village craze, and traditional Korean houses are already being constructed by local government bodies.

Thanks to K-pop and the Korean entertainment industry, hanok villages have become a new tourism trend, but some experts are concerned that the newly built villages and complexes may lose popularity when the Korean wave fades away.

“Some residents of Jeonju Hanok Village left their homes in early 2000 when the town was in its initial development phase, and many homes were left abandoned. Other hanok villages are quickly springing up in different cities, but efforts to preserve these houses must be carefully planned,” said an official from Jeonju Hanok Village.

A typical hanok house built 30 years ago in Jeonju Hanok Village has a market value of 1.5 billion won ($1.3 million), which is the equivalent of three or four apartments in the city.