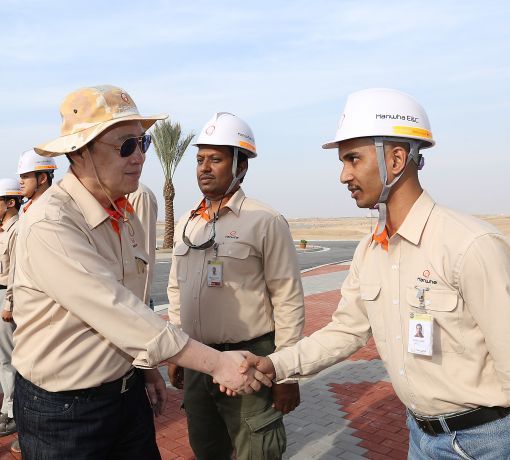 Kim paid a visit to his employees working on the construction project in Bismayah, Iraq, in order to review progress at the site and cheer them up. (image: Hanwha Group)

SEOUL, Dec. 10 (Korea Bizwire) – After a lengthy absence, Hanwha Group Chairman Kim Seung-youn has resumed his duties. Visiting Iraq, where the company’s biggest construction project is being carried out, was his first task.

From December 7 to 9, Kim paid a visit to his employees working on the construction project in Bismayah, Iraq, in order to review progress at the site and cheer them up. The 8-billion-dollar project on a 18.3-million-square-meter site is tasked with building new neighborhoods for 100,000 Iraqi households. A total of 7,400 workers, including 340 Hanwha employees, 304 partner workers and 6,800 local laborers are currently employed at the site. About 1,400 households are scheduled to move in by June of next year.

It has been two years and five months since Kim last came to Iraq, in July 2012, to meet Nouri al-Maliki, the former Prime Minister, in order to win additional projects related to Iraq’s reconstruction.

The chairman had lunch with construction workers on the 8th, and shared sliced raw flatfish from Korea, which employees have reportedly been craving. “Thank you for your efforts to do your best in a foreign country far away from home,” he said to encourage Korean workers. “We now have a stepping stone to expand our influence in the market by acquiring Samsung affiliates. Let’s move forward to the top with our new families from Samsung,” he added.

Kim met Sami R. Al-Araji, head of the Iraq National Investment Commission, on the same day to discuss additional contracts with him. Al-Araji expressed his gratitude to him for not withdrawing the construction team despite the ongoing violence in Iraq.

Kim had served time in jail after being convicted of embezzlement. But as his health deteriorated, he received treatment at a hospital instead of being held behind bars.