“Social-cause marketing is a way to instill self-confidence in the members of the corporation and ultimately enliven the corporate brand, as well as solving some of the social problems. For Korea’s large companies whose growth is slowing in the world market, cause marketing is an important strategy to consider.”

“The most important condition for success in cause marketing is truthfulness. As soon as your cause marketing is perceived by the public as a means to promote your business, it will backfire. For this reason, you must set concrete goals and how your company can make real contributions before setting out social-cause marketing activities.” 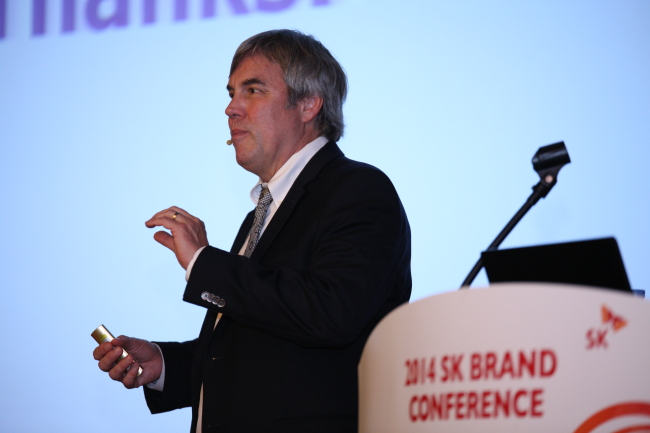 Cause marketing, according to Prof. Keller, is an activity linking corporate business with social and other charitable causes such as issues related with environment, healthcare, and poverty reduction. (Image: SK Corporation)

SEOUL, Nov. 27 (Korea Bizwire) — Kevin Keller, who is considered one of the world’s best-known experts in brand marketing, delivered a speech on the importance of cause marketing in the 2014 SK Brand Conference held on November 24 at Post Tower in Seoul’s downtown.

Cause marketing, according to Prof. Keller, is an activity linking corporate business with social and other charitable causes such as issues related with environment, healthcare, and poverty reduction.

As ways to secure truthfulness, he suggested linking with non-profit organizations, approaching specific problems in particular regions, and charity concepts that dovetail with the company’s products or services.

He also commented on the cause marketing activities undertaken by SK Group including Happy Lunchbox and Happy School that they are truthful approaches to social issues without highhandedness.

At a time when the issues of social enterprise and corporate transparency are becoming more important, he said, this is excellent timing for the group to engage in the activities.

[NEWS & HISTORY]
The first known case of cause marketing in America was in March, 1974 when Carr & Associates International was formed by John T. Carr as a way of “giving back” by engaging Charitable Causes and Businesses to support each other. The organization was promoted by John T. Carr’s focus on enlisting businesses to give back referral fees on what they might normally spend for marketing; and having those funds redirected toward the Charitable Cause of the buyer’s choice.

The recent interest in cause-related marketing is generally argued to stem from American Express, who apparently coined the phrase in 1983. Following various pilot schemes in 1981, American Express developed a campaign which donated funds to a number of different non-profit organizations as part of the San Francisco Arts Festival. Essentially every time someone used an American Express Card in the area, a 2-cent donation was triggered and each time new members applied for a card a larger contribution was made. The marketing goals that American Express had for this programme were apparently exceeded. Card usage was reported as having increased significantly and relationships between American Express and their merchants also improved as a result of the promotion. From the charity’s point of view, despite being a short-term campaign, $108,000 was raised, making a significant contribution to their work. The terms “cause-related marketing” and “cause marketing” continued to grow in usage since that time. In more recent years the term has come to describe a wider variety of marketing initiatives based on the cooperative efforts of business and charitable causes. (Wikipedia)