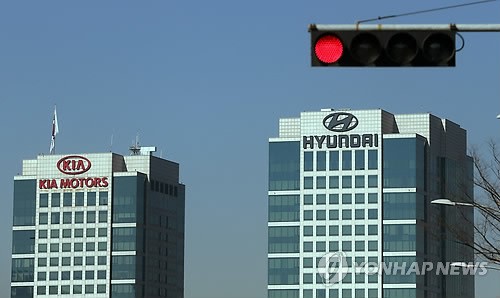 Hyundai Motor Co. and Kia Motors Corp. are facing growing challenges in emerging markets with their sales either shrinking or slowing in growth. (image: Yonhap)

According to data from the Korea Automotive Research Institute and other industry groups, Hyundai and Kia, South Korea’s No. 1 and No. 2 carmakers, sold 103,319 and 56,130 vehicles, respectively, in China last month, down 10.3 percent and 6.4 percent from a year earlier.

The sales drop is expected to lower their combined market share in China to 8.1 percent, the lowest since 2010.

The decline comes despite the overall sales growth in China where about 1.98 million cars were sold in January, a 13.5 percent rise from a year earlier. Cheaper options from Chinese competitors were cited as one of the reasons for the sluggish sales.

“Going forward, the competition landscape in China is going to be diversified as home-grown competitors are joining in the race, which could negatively affect profitability of other automakers,” said Cho Soo-hong, an analyst at NH Investment & Securities.

According to tallies from a local automakers’ association, Hyundai sold 34,780 cars last month, which is a 4.1 percent rise from a year earlier but lower than the average sales growth of 5.8 percent in the Indian auto market.

Hyundai retained its No. 2 status in India following Maruti Suzuki, but its market share dropped to 15.2 percent from 15.6 percent in December. Maruti Suzuki saw its January sales grow 9.3 percent on-year to 106,000 units.

In Russia, Hyundai and Kia reported a marked sales growth in January, but the brisk performance will likely be short-lived considering the economic instability there.

Hyundai sold 12,707 cars in Russia last month, up 15 percent from the year before, while Kia’s sales edged up 1 percent on-year to 11,346 units. Market analysts see the sales increase as meaningful in that it comes despite the overall sluggish economic situation in Russia that resulted in a sharp decline in demand.

The carmakers attributed the strong performance in January to sales of cars they had already exported to Russia in December and said the figure would likely worsen in the months to come.