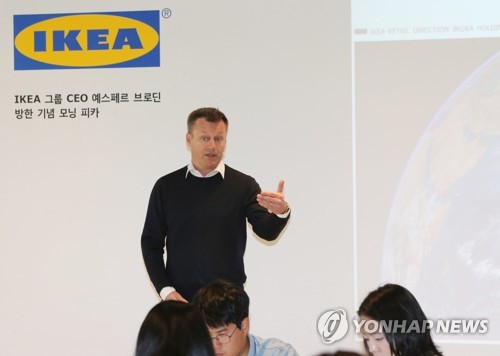 The company said it plans to launch an e-commerce channel in South Korea by August, nearly four years after it entered the country with its first store in Gwangmyeong, southwest of Seoul.

“Online Ikea is something we will realize in all markets within the coming years,” Brodin said during a meeting with reporters at its second local store in Goyang, north of the capital.

Andre Schmidtgall, the chief retail manager of Ikea’s Korean unit, added preparation is under way to launch the e-commerce channel in this financial year.

Brodin also said the company is reviewing various ways to expand its presence in urban areas, adding Ikea has been conducting tests in some markets.

“We will investigate a little bit more what is important, what are the possibilities to come closer to mega cities, not knowing how they will exactly look like,” Schmidtgall said.

It opened its second store, in Goyang, in October last year, with a plan to run six stores and e-commerce operations in South Korea by 2020.